The rivalry may not be there on the ice, but Avalanche fans still HATE the Detroit Red Wings (and vise versa) and I am REALLY looking forward to tonight's game. The Wings are hurting a bit. Johan Franzen and Pavel Datsyuk will both miss tonight's game. Still a dangerous hockey team, though. Personally, I'm curious as to when the last time the Avs were ahead of the Wings in the standings when they played each other. Would it go back to before the lockout?

Both of the dickheads - Todd Bertuzzi and Brad May - will be in the lineup tonight. This article has a list of some of the line combos used in practice which will be a change from what they've been going with recently.

Craig Anderson will get his 8th straight start for the Colorado Avalanche. He'll face off against Chris Osgood (thanks to the fine folks at Left Wing Lock for posting that info). 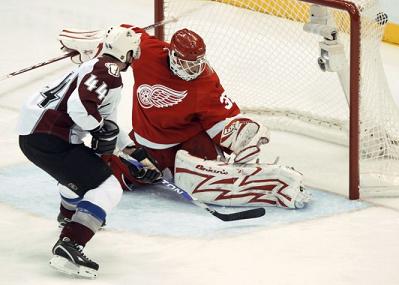