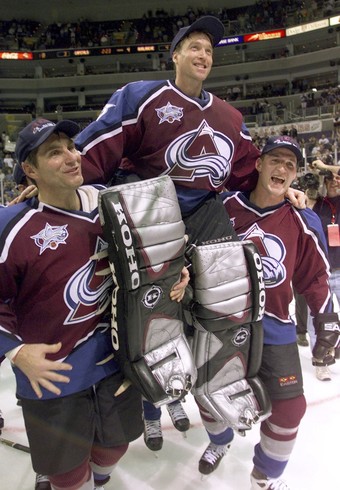 October 18th, 2000 - In OT, Peter Forsberg tips a Ray Bourque pass past Olaf Kolzig to give the Avalanche a 4-3 win over Washington. Patrick Roy got the win - the 448th of his career passing Terry Sawchuk to become the NHL's career wins leader. Sawchuk's mark had stood since 1970 but has since been eclipsed by Curtis Joseph, Ed Belfour and Martin Brodeur (who last year passed Roy to take over the career record). The next guy to do it could be Chris Osgood, who is 56 wins behind Sawchuk (especially since he only has to face Cody McLeod four times a year).