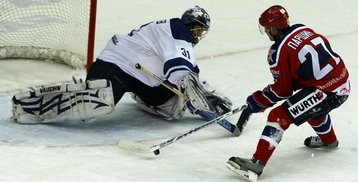 A look back at the news and events for Avs prospects for the week of September 27th through October 3rd.  In this week’s edition, we look back at the exciting start of the Lake Erie Monsters season, injury news and a preview of the NCAA season.

There are high expectations in Cleveland this year, and no I’m not talking about the Browns.  The Monsters faithful hope the Avs can stay healthy this year.  If so, a playoff birth for the young franchise is a distinct possibility.  After splitting time with Jason Bacashihua last year, Tyler Weiman will be the man this season for the Monsters.  Weiman had eight shutouts for the Monsters last year and also participated in the AHL All-Star Game.

In addition to Weiman, the Monsters will be led by veterans such as captain Brian Willsie and alternate captains Brian Fahey and Darren Hadar.  Fahey was acquired during the offseason for Nigel Williams, a trade that has raised red flags about Williams.  Haydar has had many successful seasons in the AHL, including a 122 point campaign in 2006-07.  This presented the last best opportunity for Haydar to crack a NHL roster.  Despite the disappointment of being reassigned, and the rumors of Haydar jumping to Europe, he’s showing a strong commitment to the Ohio based franchise in the early going.

The Monsters opened their season on the road against the Rochester Americans on Saturday.  The Monsters overcame a two goal deficit to beat the Amerks in overtime 3-2.  Philippe Dupuis was the hero, scoring twice, including the game winner.  Brian Willsie had the other Monsters tally.

Bad news to start the season for the Monsters is the injury to former BU Terrier Brandon Yip.  Adrian Dater, from the Denver Post, cleared up a bit of a mystery; indicating Yip hurt his hand during a preseason game against the St. Louis Blues.  A broken hand will likely keep Yip out of the lineup for a few weeks.

From the AHL, we head to the Canadian juniors.  While fans in Brampton and Erie are patiently awaiting the status of Matt Duchene and Ryan O’Reilly respectively, Cameron Gaunce has continued to be productive for the Mississauga St. Michael’s Majors (OHL).  Brock, a member of Hockey’s Future, runs a fantastic OHL Blog and had this to say about a recent performance of Gaunce:

Gaunce was solid tonight. As usual, he played a very quietly effective game. He doesn't make any plays that make you say "WOW," but he doesn't have to because he makes the smart choices at both ends of the ice. He runs the powerplay very effectively (and often plays the full two minutes), using his hard, low point shot to create scoring chances off his rebounds. Gaunce also picks his times to pinch in and/or rush the puck into the offensive zone very well. He increased the amount he was rushing as the game went on and as his team needed to gain entry into the offensive zone. Defensively he's generally a rock, although you'd always like to see him use his size to push people around. I'm pulling for him to get an invite to the Canadian WJC camp. He finished the game with 2 assists.

We next head to Kitchener, home of the Rangers, who feature such talents as Columbus Blue Jackets 2009 first round pick John Moore and Jeremy Morin (property of the Atlanta Thrashers).  Avalanche 2009 sixth round pick Brandon Maxwell has gotten off to an inauspicious start.  Maxwell has posted two wins in three starts, but he and his defense have allowed 15 goals in those three games.   A roster spot on the US Under-20 team for the upcoming World Junior Championship is unlikely, but Maxwell will be an interesting prospect to follow for this season.

Next up is eastern Canada and the Quebec Major Junior Hockey League.  The Quebec Remparts are captained this season by Kelsey Tessier, who is currently averaging a point per game.  Peter Delmas was looking for new life with a trade from Lewiston to Quebec.  So far the start has been mixed.  It’s good to remember that the QMJHL is a higher scoring league then the OHL and WHL.  The save percentage for Delmas is still slightly under .900, but in the early going so far he has lowered his goals against average by 0.80.  Quebec however does have the second best record in the league at 6-1-1-1.

Victoriaville is also off to a solid start in the Q.  Joel Chouinard, an alternate captain for the Tigres, has five points in his first six games and is a plus two.

In the WHL, it’s been a .500 start to the season for the Saskatoon Blades.  Stefan Elliott has five points in his first six games.  Tyson Barrie’s season has been derailed by a knee injury.  He’s expected to miss the next two to three weeks.  He had two points in his first three games.  Kelowna has a 3-2-1-0 record to start the season.

In Russia, Denis Parshin (pictured), 23, has five goals in his first nine games with CSKA this season.  His hot start makes this Avs fan wonder why the team wasn’t willing to offer him a NHL contract (it was rumored he was only offered an opportunity to play in the minors).  Yes he’s small, but he’s super skilled and if the KHL has their way, the soonest we will see him in an Avalanche uniform will be after his 28th birthday.  It would be nice to see what he can do on this side of the pond.

In Sweden, defending champion Färjestads BK, has won four of their first five games.   Jonas Holos, who the Avs tried to sign this offseason, has continued his strong play with the club.  Holos wanted to honor the rest of his contract and will be free to sign with the Avalanche next offseason.

The college hockey season will kickoff next weekend and as a season ticket holder for the Denver Pioneers, I couldn’t be more excited.  Denver is one of the preseason picks to win it all and this is arguably the most talented team George Gwozdecky has had to begin a season.

Defending champion Boston University lost Hobey Baker winner Matt Gilroy and Colin Wilson, but will be led by Avs 2007 first round pick Kevin Shattenkirk.  It will be important for Kieran Millan to avoid a sophomore slump for the Terriers.

In next week’s edition, we’ll find out how the Lake Erie Monsters performed in their home opener and discuss the start of the college season.  Until next time!