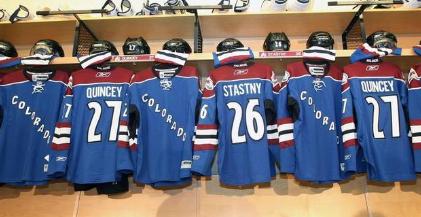 Yesterday the Colorado Avalanche unveiled their new alternate jerseys, to mixed reviews.  Some fans love them, more fans think they're OK, and a few fans hate them.  Not much surprise there.

Personally, I fall into the second category: they're OK, but could have been better.

Any time you assess the aesthetic quality of something, you have to rely on your own personal whims.  There's no "right answer," except when it comes to the Avalanche home and away "uniprons."  Those are awful.  You're wrong if you think otherwise, sorry.

When it comes to the third jerseys, though, I'll concede that everyone doesn't have to agree with me.  I'm happy to be the only person who holds my views, if that's the reality.

My first criticism is the blue that dominates the jersey.  Why choose a color that isn't quite the standard Avalanche blue but also not the blue used by the Quebec Nordiques?  Even Paul Stastny thinks the new jerseys are a subtle homage to the previous incarnation of the Colorado franchise, but he's wrong.  For one, the Avs don't have the rights to use the Nordiques logos or color schemes, and two, they've only once made a conscious effort to recognize that part of the team's history.  The new third jerseys are not a true nod to the Quebec years.

My second criticism is lack of bottom striping.  We've seen how teams can effectively use the bottom of the jersey to tie the other aesthetic elements together.  The Boston Bruins look pretty excellent in both their home and away jerseys.  Even with the non-traditional bottom shape of the current RBK jerseys, bottom striping can help teams retain a traditional look.  The new Avs third jerseys should have the same striping across the bottom as they do around the arms.  The old Avalanche third jerseys had such striping and many fans still love those.

I liked the diagonal "Colorado" lettering on the old alternates and I like it on the new ones.  I also love the consistent coloring and striping on the socks.

Overall, the new third jerseys look fine.  They're definitely better than the home and away abominations we've had to endure for the past several seasons.  But they're just short of great, which is frustrating since the team itself has improved so drastically since last season.  I suppose in the RBK era, we all just have to expect less than great (or worse) and live with it.

ADDENDUM: Uniwatch is not feeling them:

The Avs have finally unveiled their alternate jersey, which looks just like I said it would (i.e., really bad) more than two months ago.