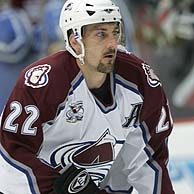 November 21st, 2005 - Phil Sauve leads the Calgary Flames to a 3-2 Shootout victory over the Colorado Avalanche at the Pepsi Center. Steve Konowalchuk played the entire game and had an assist, but suffered a right wrist injury at some point during the match. Originally listed as day-to-day, an MRI a few days later revealed torn ligaments requring season-ending surgery. Although Kono would return for two playoff games the following May, this would be the last regular season game for #22 - he was forced to retire the following summer.