Colorado Avalanche: What the Hell Happened?

Share All sharing options for: Colorado Avalanche: What the Hell Happened? 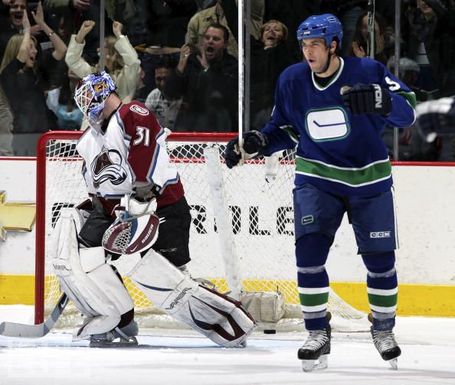 Halloween, 2009. Although the Avalanche had lost the night before to San Jose, we woke up that Saturday feeling pretty good about our team. The Avalanche had finished October at phenomenal 10-2-2 and, as we dressed our kiddos in their Halloween costumes and ran out to the stores to stock our trick-or-treat bowls, we had a little spring in our step. Our sad-sack Avalanche of last year had turned things around and were currently perched on top of the Western Conference (indeed, they were tied with Pittsburgh at 1st in the league).

Oh, sure, we got indignant when James Mirtle (and others) predicted we'd start to fall back into the pack or whenever someone failed to give the Avalanche props in power rankings and the like. We're proud of our team and, after 6 months of nothing but negativity (on the ice and off), it was great to have something to feel good about again. Deep down, though, we knew. The team was better (not that we could have gotten much worse than the steaming pile of dung that was the 2008 season); the Avalanche were working harder, working smarter and, for the first time in years, had a bona fide #1 between the pipes. But - and this may be the largest "but" I've ever written - this was not a first-place team. Deep down, we knew it.

Since then, it hasn't been very pretty. The Avalanche have gone 3-5-1 in November. That won't get it done. If the Avalanche were to continue at that pace, they'd finish the season at 33-40-9. 75 points. Last year, 75 points would have been good enough for...you guessed it: 3rd-worst record in the NHL. Are you guys ready for the next "tank it 4 ___" watch?

What the hell happened? Lots. Adrian Dater covered it very well on Friday night after the latest debacle. I agree with every single point in that excellent post. I'd also like to flesh out a few thoughts I've had bouncing around in that little plinko machine in my head.

Unquestionably, any discussion about the Avs and their now-wheelless bus has to start with the powerplay. After 6 games, the Avalanche had 10 PP goals and were humming along at 38.5% efficiency. For a team that scored just 50 PP goals last year, that was an amazing start. Sadly, it wouldn't last. In the 17 games since that game 6 in Toronto, the Avalanche have just 7 PP goals in 62 chances. That's a pitiful 11.3% efficiency, even worse than 15.7% the Avalanche mustered last year and the 14.6% laugher under Joel Quenneville that created our power play kitten meme. Why has it been so bad? Losing John-Michael Liles has had an impact. It's probably not a coincidence that the PP collapse coincided with Liles' leaving the lineup; he was injured in the Toronto game. In a perfectly symmetrical stat, the Avalanche have had 44 PP opportunities this year with Liles in the lineup and 44 PP opportunities with him out of the lineup. With him in, they've scored 13 times (29.5%). Without? 4 (9.1%).That's ugly.

Compelling stats, but there's more to it. In the first 6 games, the Avalanche were getting something on the powerplay they have lacked for years: scoring from the point. Kyle Quincey was absolutely revitalizing in the early going and he, Liles and Brett Clark combined for 3 goals and 11 assists on the PP in the first 6 games. Since then, bone dry and I mean Mojave Desert dry. No goals for any of them. Liles has 2 assists (both in Friday's game). Quincey and Clark have just one PP assist each. What happened to them? In the last 4 games, Quincey hasn't even registered a shot on net (PP or otherwise). They have been so ineffective that Joe Sacco has resorted to using a forward on the point. It's working about as well as it did under both Joel Quenneville and Tony Granato. In other words, it isn't.

And how about that Kyle Quincey? When the Avalanche traded for him this summer, I was less than pleased. It wasn't so much a knock on Quincey (or Tom Preissing...don't ask me to go there right now) as I felt it was a mistake to trade Ryan Smyth. My argument was that the Avalanche had a fair number of manageable defensemen, while they were thin offensively and at left wing. And that was before the sudden maturation of Kyle Cumiskey or the surprising play of Ryan Wilson. For a while, it looked like Quincey would sway me. In an interview for Second City Hockey's fan program back in October, I said the following:

Quincey has been a GREAT fit for us defensively. He is already paying dividends. The Avs have been looking for a PP quarterback for eons and his crisp passes have already started a boatload of breakaways at even strength.

What happened to those dividends? Did the board of directors vote to suspend them? Where did that PP quarterbacking go? Where did those breakout passes go? What about the big hits he was throwing around in the first couple of weeks? What's with all the stupid penalties all of a sudden (6 minor penalties in the last 4 games)? Is he still an upgrade for our defense? Yes. Has he been playing so far above the guys in the pressbox to warrant the trade of Smyth? No. I mean, Ruslan Salei can take bad penalties and do nothing on the PP just as well as Quincey has done lately. Speaking of Salei, he's set to return from his back injury soon. With all that defensive depth I talked about, is he even going to play? Or are we just going to pay Salei and Preissing $5.775 million to watch from the press box?

While I'm aware that moving Smyth was a salary move, you'd like to see a big trade like that make your team better. Smyth, in case you missed it, has 23 points in 22 games this year. Our #1 left wing, Wojtek Wolski, has a solid 20 points. No complaints there. After Wolski, though, our left wingers are providing butkus. Cody McLeod has 8 points. Darcy Tucker has 7. David Koci has 1. The Avalanche are so hard up at left wing that Marek Svatos (8 points) played there on Friday; he has 3 even strength points this year. I like Kyle Quincey, but wouldn't this team look much better right now with Ryan Smyth skating with Matt Duchene and Milan Hejduk rather than Svatos or Tucker?

Smyth's linemate this year is Anze Kopitar, who is tearing up the league (33 points). Smyth's linemate last year was Paul Stastny. While Stastny hasn't been terrible, he's been quieter than he should be. You may recall that when Kopitar signed his big extension with the Kings last year, I opined that that deal would be the ballpark for Stastny's upcoming extension. Sure enough, when Stastny signed his extension about a month later, it was just $200,000 less per season than Kopitar's. How's that worked out for the respective teams? For the Kings, really well. Here are Kopitar's numbers before signing his extension and his numbers since:

Since becoming rich, Kopitar hasn't rested on his laurels. In fact, he's increased his scoring production. You know what's coming next.

Stastny's production has slipped since signing his extension. Now, .79 PPG is not terrible, but it is a decline. That's a 65-point season, something 50 players managed last year. In fact, only 5 teams didn't have a player get to 65 points (want to guess one of them?). It's good, but it's not great. It's not quite $6.6 million worth, not quite highest-paid-on-the-team great, not quite 21st-highest-paid forward-like. It's hard to pick on a guy who leads the team in scoring, but Paul Stastny needs to be doing more and he needs to do it on a more consistent basis. Stastny is held off the scoresheet on too many nights and, in fact, is in the longest goal-scoring drought of his career (12 games). When he was a 2nd line center and the Avalanche had other weapons, this would have been okay. They don't have other weapons.

I'm already running long, so I'll have to speed through the rest of this. Craig Anderson has a 3.39 GAA and .885 Save Percentage in November and lately he's been making us think fondly of Jose Theodore's awful stickhandling. Perhaps we should hold off on giving him the keys to the city for a while longer. Our PK was terrific in October (12.9%) but it's been dreadful since (26.3%). The Avalanche were supposed to be harder to play against under Joe Sacco, but the Avs are giving up more shots per game than they did under Tony Granato and they are hitting substantially less (from about 10 per game to 6). How is that better?

At the end of October, Joe Sacco looked like a coach of the year candidate for the way he had turned this team around. In just 3 weeks, that's gone away. Although they are still high in the standings, they are looking more and more like last year's team - no scoring, defensive lapses, inconsistent goaltending. With another bad week, the Avs could be out of the top 8 altogether (they are just 5 points ahead of the 11th place Canucks).

Personally, I think the next few weeks are going to be very interesting. As we approached the start of the season, it seems like most of us fans felt that this season wouldn't be so much about winning as losing as it would be about effort and player development. That's going to be put to the test shortly, I'm afraid. Will we be frustrated with repeated losses? Or will we really be content to watch guys like Wojtek Wolski, David Jones and Kyle Cumiskey who are having career years (Cumiskey has already set a career high, and Jones needs just 2 more points to do the same) as well as seeing kids like Matt Duchene, Ryan O'Reilly and Ryan Wilson blossom? It will be an adjustment for sure, but not all that new for us. After all, we were 3 games over .500 and in 8th place as late as January 10th last year. I think we all know how that ended for us.