Share All sharing options for: Game 24 Preview: Flyers at Avalanche

The weekend is over and now it's time for us to get back to the grind. Oh joy. The good news is that the Avalanche will not blow a lead and give points away to a division rival tonight. The bad news is that they are hosting a good team tonight in the Philadelphia Flyers. The Flyers had just won 7 of 8 before dropping a pair to San Jose and Phoenix on Friday and Saturday.

Philadelphia, of course, is the new home of Ian Laperriere. He bolted after failing to reach an extension agreement with the Avs, signing a 3-year, $3.5 million dollar deal with the Flyers. While I'm rooting for Lappy, I detest the team he plays for. I've always hated the Flyers. I originally was going to say that hatred goes back to the days of that douchebag Eric Lindros, but I realized it goes back even farther. I first started getting into hockey in the early 80s. And what did the Flyers look like in the early 80s? Idiots. It might seem silly as I didn't have the same hatred of the Whalers, another Cooperalls team, but even as a new fan I thought long pants on hockey players looked ridiculous and I have hated the Flyers ever since. The fact that guys like Lindros and Chris Pronger (one of the few hockey players I flat out despise) have played for them only enhanced my festering dislike.

Still, I have to admit they are a pretty good team. Jeff Carter and Mike Richards make a formidable 1-2 punch down the middle and former UNH Wildcat James van Riemsdyk has certainly been a nice addition to the Mile High Uniprons (my fantasy team that is currently doing surprisingly well). On the blueline, you have Chris Pronger, Matt Carle (expect to hear a lot of talk from the Altidudes about this former DU grad) and Kimmo Timonen. Impressive. And then you have an early contender for comeback player of the year, Ray Emery, in net. As you can see from the Tale of the Tape below, the Flyers have the statistical edge in just about every key category. I assume Emery will be the guy tonight, as he's started 18 of the Flyers 20 games and Brian Boucher played just last Wednesday.

Simply put, the Avalanche need to play better in all facets of the game. The powerplay showed signs of life on Friday. An effective powerplay might really come in handy against one of the most penalized teams in the league. On the flip side, the Avs need to stop taking the stupid penalties that have been plaguing them, as the Flyers have a potent PP of their own (bonus fact: the Avs have the 2nd most bench minor penalties in the league). Craig Anderson has already been confirmed as the starter Monday. It doesn't look like any major lineup changes are expected. Adam Foote is still doubtful and the lines (at least the top 3) appeared unchanged in practice from what we saw on Friday.

This game could be painful on a couple of levels. First of all, seeing Ian Lappy do stuff that we've desperately needed this year in a Flyers jersey is going to be hard (here's a sneak preview, just to start the process). More importantly, this is, no bullshit, a must-win game. If you didn't like my article earlier today, you might want to skip the rest of this paragraph. If the Avalanche lose in regulation tonight, they could get passed by as many as 3 teams in the standings (Columbus, Calgary and Phoenix). So, let's win. Okay, guys?

Tale of the Tape

Where is Taylor Arnason Today?

Exciting news from the motherland, komrades. Taylor scored his first KHL point on Saturday, assisting on Roberts Burkarts 2nd period goal! According to this recap, "Bukarts had Tyler Arnason to thank with goalie  Gelashvili still recovering from Arnason’s shot when Bukarts pounced." Very nice! Unfortunately, Yaroslavl's Jacob Vacisek tied the game up a few minutes later and neither the Dinamo's Edgar Masalaskis nor the Lokovitv's Georgy Gelashvili would allow another goal the rest of the way. The game ultimately went to a shootout, where, sadly, Yaroslavl won it (Arnason did not make an attempt).

Arnason reacted to the tough loss with shock and disappointment, as shown here: 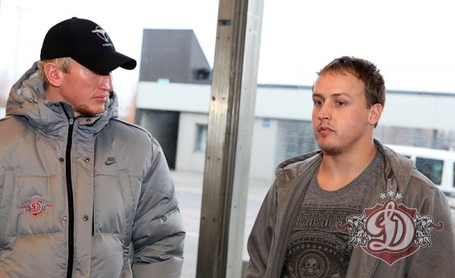 By the way, I wonder if getting his own snazzy team coat played into his decision to head east.

Tonight, Arnason and his club will be in Balashikha to take on the Militiamen of the HC MVD. As you know, Balashika is a about 25 miles east of Moscow and is, according to wikipedia, known for it's unique rivers and waterway system.

And, no, I'm not growing tired of this yet.