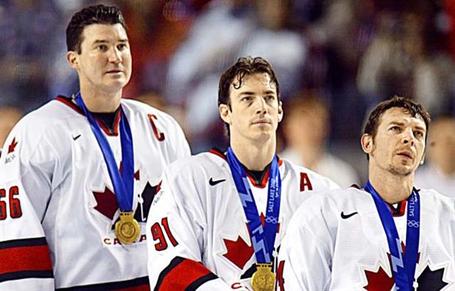 Around SBN, each of the hockey blogs is running a little preview of the Olympics with a look at who has a chance to make the Olympic rosters. We're still about a month and a half away from when the rosters are announced (Canada announces on December 31st, USA on January 1st), but here's a look at how the Avalanche are shaping up as of today. Remember, in 2006 the Avalanche sent 11 players to 8 different Olympic squads, tops in the league. The list won't be as big this year.

Craig Anderson was not invited to Team USA's orientation camp in August (Tim Thomas, Ryan Miller and Jonathon Quick got the nods), but his strong play to date has to put him in contention to make the roster. Fairly Safe Bet

Paul Stastny did attend the orientation camp and figures to have a solid chance at making the roster. Fairly Safe Bet

John-Michael Liles was not one of the 12 defensemen named by Team USA GM Brian Burke, so it would seem doubtful that Liles will get a chance to repeat his 2006 Olympic participation. Work To Do

No Avalanche players were invited to Team Canada's camp in August. Actually, two were invited...but Ryan Smyth got traded and Joe Sakic retired. The Avalanche have some good Canadian-born players, of course, but no one strong enough to crack a very deep Team Canada squad.

Milan Hejduk already has a gold medal (1998) and a bronze medal (2006) to show for his 3 Olympic appearances. Figure him to be on the team once again. Pack Your Bags

Peter Budaj played in the 2006 Olympic games (he was 2-1 with a 2.01 GAA) and is a good bet to make the team this year as well. He's likely to be battling Jaroslav Halak for the starting position. Nearly A Lock

Marek Svatos also played for the 2006 team. I'm not sure that he's a lock; perhaps they need an enforcer? Fairly Safe Bet

Ruslan Salei is a lock...assuming he's healthy. Pack Your Bags