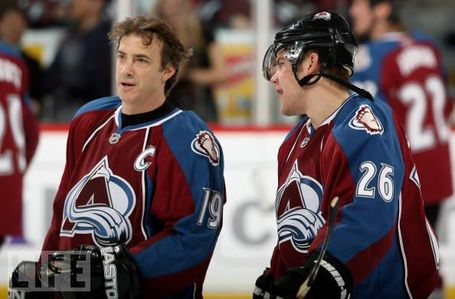 November 26th, 2008. Speaking of things we're thankful for, this date marked the final home game for Super Joe Sakic. Sakic was returning after missing 6 games with a back injury. Unfortunately, he re-aggravated the injury during the game and missed the final 9 minutes. He took the ice again two days later in Phoenix, but only managed one shift. He would miss the rest of the season to injury and, I'm told, retired the following summer (I still don't believe that rumor, however).

As for the game, the Avalanche won 3-1 on goals from Daniel Tjarnqvist, Ryan Smyth and Ian Laperriere. Peter Budaj turned away 21 shots and was named first star of the game. Sakic skated on a line with Wojtek Wolski and Milan Hejduk, but was held scoreless (his final NHL shot was on Manny Legace). The game also marked the first NHL meeting of the Stastny brothers - Yan and Paul.