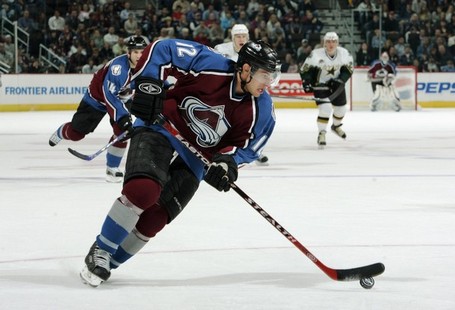 November 27th, 2005 - To replace Steve Konowalchuk (wirst surgery) on the roster, the Avalanche recalled Brad Richardson from Lowell. Richardson made his NHL debut on this day - a 6-2 win over the Canucks at the Pepsi Center (hopefully, you've figured out the above picture is NOT from this game). Richardson played 9:04 in the game, skating on the 4th line with Dan Hinote and Cody McCormick. Richardson - a 5th round pick in the 2003 draft - would play 136 games for the Avs over 3 seasons, scoring 19 goals and 21 assists.