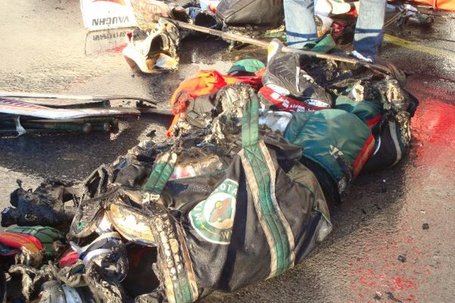 This is probably bad.

The equipment van of the Minnesota Wild has apparently caught fire and most of the team's gear has been destroyed.  Obviously, this is a big deal.

Minnesota Wild equipment van was in an accident, caught fire and much of the Wild players' equipment has been burned so badly it's toast.

No injuries in the accident, apparently, but if u know anything about NHL players and equipment, especially skates, players are apoplectic.

Wearing a brand new pair of skates or new equipment in an NHL regular season game is no player's idea of fun.

Nik Backstrom's equipment, all of it apparently, is up in smoke. Wild checking with the league to see what their options are. Unprecedented.