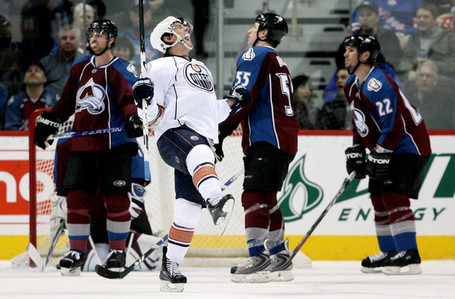 After last night's horrific collapse I started (actually continued) to wonder what the Avs problem was with holding on to leads. Even when they win games it seems like they often allow their opponents to creep back into the game; the Minnesota game on Monday being a good example. In the end I think that two stats can explain this; one 'good' and one bad: The Avs are 25th in the league in shots against per game with 32.2 and they are 2nd in the league in blocked shots with 640. Now clearly the 32.2 shots against is terrible but the 640 blocked shots should be a good thing right? Well let's look at the pros and cons of blocked shots.

-Stops the puck from reaching the net.

Only one pro but it's a big one. If the puck can't reach the net it isn't going to go in it.

-Can cause injuries. I know analysts are always praising players for sacrificing themselves but do any of us actually want to see Statsny go down for half a season blocking a shot?

-Can deflect the puck on net or screen the goalie if the block fails.

-To block a shot, a shot needs to be fired which means that the OTHER team is in control of the puck.

These cons mean that a blocked shot should be the method of last resort. They are dangerous, easy to screw up and a player is reacting instead of taking the initiative. So the fact that the Avs have 640 blocked shots is actually not an enviable statistic.

All year we've had to watch the Avs sit back on a lead and they often lose it. My first response is to rail about the laziness and timidness of the players. But really? Do Duchene, O'Reilly or Hejduk seem like the type to stop skating? Do Galiardi, McLeod or Stewart seem like the type to stop playing with an edge to their game unless explicitly instructed to by their coach?

I am starting to think that this method of defense is one designed and pursued by the coaching staff. Optimally they want the Avs to play positional D where they keep the opposing players to the outside and block as many shots as possible. It doesn't sound bad but it is not working. The Avs are probably allowing more shots than any other team in the league right now and Anderson seems to be wearing out.

I think that the Avs need to play the exact opposite. Constantly pressure the puck whether they are down by 2 or up by 4. They are at their best when they are playing a hard forecheking game and their takeaway numbers (316, 4th in the league) are really good. The Avs need to take the initiative and play a puck control game rather than wait for the puck to come to them and try and get in front of it.

What do you think?