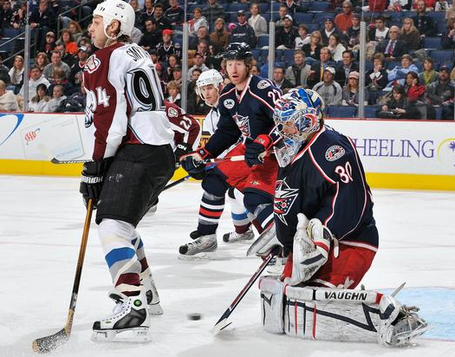 Congratulations to Dan LaCosta on his first NHL shutout

Sometimes it hurts to be right. 5th stringer Daniel LaCosta did indeed become the next unknown goalie to beat the Colorado Avalanche. Not satisfied with just a garden-variety victory in his 2nd career start, LaCosta made everyone in Labrador City, Newfoundland proud by shutting out the potent Avalanche offense...*taps earpiece*...I'm sorry, I'm being told that the word I'm looking for is "impotent".

The foreshadowing was strong for this one. We know the Avs can't beat Columbus, struggle against backup goalies and, for some reason, can't win on Tuesdays. All that was remaining was for the Avs to punch their time card for 60 minutes and we could all move on to the next disappointment.

The Avalanche hung in there for a while. They were outshot 16-4 in the first period, but Peter Budaj was in the zone and Columbus' powerplay was laughingly bad (until you realize that Peter McNab could just as easily be describing the Avs' powerplay when he rips Columbus' pp apart). The boys in burgondy turned it around in the 2nd, outshooting the BJs 13-3. The results were the same, though - no goals for either team.

Just 2:29 into the 3rd period, after failed Avalanche clearing pass #4,394 on the seaoson (this one brought to you by Scott Hannan), Andrew Murray found a two inch hole between the back of Peter Budaj's knee and the goal post...just like Luke Skywalker used to do with his T-16 back home. And just like that, the Avs were done like the Death Star. The playbook was as we've seen it all year: Colorado had chances, but their opponent scored the goals. Jason Williams scored on an odd-man rush that was helped by John-Michael Liles lining up his man for a big hit and then missing widly sending him far out of the play. Freddy Modin put the finishing touches with a goal a couple of minutes later, but it didn't matter (well, I'm sure it did to him). The 1 goal deficit after Murray's goal might as well have been 100 - there was no way the Avs were going to score.

I think I know I've resigned myself to missing the playoffs, because I actually found myself rooting for LaCosta once the game was out of reach at 2-0 (yes, that's a sad, sad statement). I also found myself enjoying the game even though I knew throughout that it was not going to end well. Chris Stewart was incredible; can we get him some more minutes, please? Actually, his entire line - Stewart, Lappy and Willsie - was the Avs best line all night. And yes, that too is a sad, sad statement.

As a team, the Avs were hitting everyone that moved - Stewart, Lappy, Salei, Tucker, Willsie...even Hensick got into the hit parade. Which leads me to the following question: why now? This is the type of play we thought we'd be seeing all year, after a summer of signing nothing but "character guys". Yes, the Avalanche still lost and a missed hip check was a big factor, but it was fun to watch AND it created scoring chances. When all is said and done, I believe the team's inability to bring this sort of physicality on a regular basis - hell, I'd take an occasional basis - will be my biggest head-scratcher of the year, especially considering the coach. 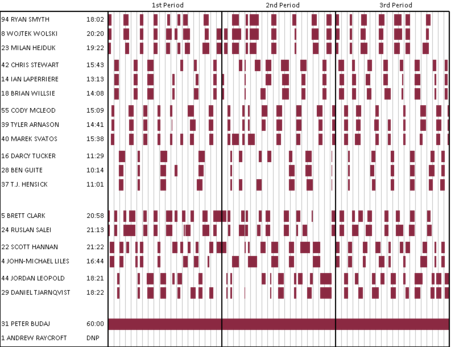 The Avalanche are in Minnesota tonight. Raycroft will start. Gulp.  The St Louis Blues lost last night and next play on Thursday.

The question for the Avalanche now might not be whether this team can pull off a near-miraculous late-season run to squeeze into the playoffs. Instead, can it avoid finishing in the Western Conference basement? - Rick Sadowski, Rocky Mountain News

It's both risky and lazy to always equate losses to a collective lack of effort — often, it's code for "lack of talent" — and it wasn't as if the Avalanche laid a 60-minute egg. But Colorado was outplayed on the road by an up-and-coming, if frequently boring, team that won all four games against the Avs this season. Plus, the Blues Jackets' "other" young goalie was more than good enough to outduel Colorado's Peter Budaj. - Terry Frei, Denver Post

"They're not a dangerous team this year," Blue Jackets defenseman Jan Hejda said. "Probably some of it is injury, but they haven't come close to beating us this season." - Aaron Potzline, Columbus Dispatch

Columbus improved to 8-22-2 against the Avalanche. The Blue Jackets have won six of seven. - AP

LaCosta was sharp all night and made a clutch stop with seconds remaining to preserve the shutout. It is reported that Mason may be ready later in the week. Hopefully he is fully recovered. With the team playing well, it is not time to rush him back. Let's err on teh side of caution. - Dave, Blogjackets

“I can’t even really explain it,” LaCosta said. “I’m having a great time. I mean, I always have a great time when I come up – I’ve got a lot of friends here, and there’s a lot to learn. But to know I can play up here right now, it’s nice. I can’t even believe what’s going on right now.” - Michael Arace, Puck-Rakers

Avalanche center Paul Stastny, who is recovering from surgery for his fractured forearm, could begin practicing with the team as early next week, but defenseman Adam Foote doesn't seem to be making much progress from his triceps injury. - Rick Sadowski, Colorado Avalanche 24/7