Andrew Brunette pours a mountain of salt into the wound 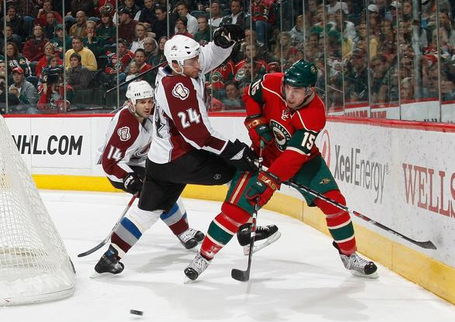 Did it have to be Andrew Brunette?

Isn't it enough to have the Colorado Avalanche perilously close to last place? Do the hockey gods really need to rub our noses in it as well? Yes, we get it; the team isn't very good and won't make the playoffs. Do you need to make it extra painful by having a backup-to-the-backup-to-the-backup-to-the-backup goalie beat us one night and Andrew Brunette on the next? What's next for us? Alex Tanguay is on the shelf, so I assume that means Patrice Brisebois will have a big night - offensively and defensively - on Friday? Sheesh.

The game? It wasn't dissimilar to a lot of other Avalanche games this year. The Avs played well and had their chances and Andrew Raycroft made some spectacular saves but, in the end, the team would come up short and the Wild won 3-2 for the 381st 1-goal regulation loss this year (it's probably lower than that, but I'm to depressed to look it up).

The Wild scored first when John-Michael Liles got caught pinching leading to a 2-on-1 for Minnesota with Pierre-Marc Bouchard finishing off an Owen Nolan cross-ice pass. Liles would land just 12:36 of ice time including just 3:40 on the powerplay in the game. In other words, he played less than Darcy Tucker.

Colorado tied it at the 13:32 mark of the 3rd when Jordan Leopold intentionally (I think) fired a hard shot over the net. The puck landed in the crease behind Nik Backstrom and Ryan Smyth was there to bang it home.

Owen Nolan made it 2-1 in the 2nd with a deflection of a Marek Zidlicky point shot. It didn't look like it should have been that difficult of a save for Razor, but obviously it was because he was nowhere near the puck when it went past him. That was really the only questionable goal that Raycroft let in.

The Avs didn't appear capable of tying the game, but Derek "Big Dummy" Boogaard giftwrapped one for us. Not content with his vicious 2nd period crosscheck to the face (and subsequent taunt) on Darcy Tucker, Big Bozo stupidly hooked Tucker on a 3rd period draw and then took a swipe at Ben Guite after Guite thanked him for his imbecilic play. The Avs got a 4-minute powerplay. They had an earlier 4-minute PP negated by an interference penalty by Marek Svatos, but made this one count with Smyth tipping a Liles point shot above Backstrom. Setting aside the fact that this is a goal we should be seeing WAY more often from the team, it was huge here, tying up the game and guaranteeing at least one point for the Avalanche.

In many ways, the game winning goal was the Avs' season in a nutshell. Andrew Brunette goes behind the net, two Avs go after him, neither can separate him from the puck, no one picks up Miettinen in front of the net and, like that, a good effort from the team and a stellar performance from Andrew Raycroft is wasted. We probably will never know if Bruno's leaving was his choice or the Avs; either way, having him set up the winning goal for the other team is just painful to watch. Darcy Tucker deserves kudos for drawing two penalties in the game...but it's not quite the same as stealing at least a point, is it?

Speaking of Tony Granato's dog house, TJ Hensick was a healthy scratch. I still want to have faith in TJ, but he sure seems like he's having trouble putting it all together.

Granato changed up the lines, moving Cody McLeod up to the Wolski line. Ryan Smyth played with Lappy and Willsie stepped into the Arnason vaccuum. Perhaps because of all the penalties, McLeod didn't see a ton of ice time, but I wasn't really fond of these combos. I especially didn't like seeing the Lappy / Willsie / Stewart line broken up, as those three played really well together the night before. 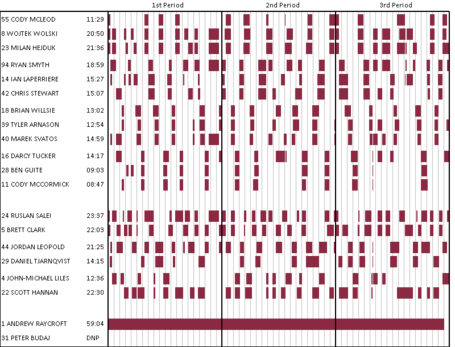 The Avalanche host the Canadiens on Friday the 13th. Fittingly, the Avalanche could be in last place going into the game; St Louis will pass the Avs with a win against Nashville tonight.

Good teams find ways to win games. Inferior teams do the opposite, a problem that is turning this Avalanche season into a lost cause. - Rick Sadowski, Rocky Mountain News

"That last goal was my fault," Laperriere said. "I overplayed that play. Stupid, stupid play by me. The play was coming around the net and I went the other way. I should have known he makes those plays nine out of 10 times. He made those plays with us, and I should have known better, and it was in the back of our net." - Terry Frei, Denver Post

Roughly two minutes after Cal Clutterbuck's goal was waved off by official review when it was ruled he kicked the puck in, Miettinen pushed the winner past Andrew Raycroft to hand the Avs their fifth straight loss on the road. - AP

"It was the only chance I had," Clutterbuck said. "I was kind of hoping they wouldn't see it. ... I tried to make it look like I was stopping." - Mike Russo, Minnesota Star-Tribune

But then it was Bruno to the rescue, as he worked his way behind the goal, and with Ruslan Salei all over him like a cheap suit, turned and passed it out to Miettinen, who stuffed it five-hole past Raycroft for the game winner. - WRT, Hitting The Post

Derek Boogaard lost his mind. It's been a long time since the big man has cost the team with his antics, but it almost happened tonight. Typically he's scratched because there's a bad matchup, but next game he needs to sit to get his head out of his rectum. You can't let a tool like Darcy Tucker get in your head. That's his game Boogey, not yours. - Nathan Eide, Hockey Wilderness

"I thought all the lines were pretty solid," Granato said. "We've been having trouble producing and finding ways to score, and sometimes you mix it up. . . . I think the combinations were pretty good. I thought the Tucker-Guite-McCormick line was very good, and the other lines were very good as well." - Terry Frei, Denver Post