The Colorado Avalanche have a decent chance of finishing up Disaster Week with their 5th loss in 8 days. Yes, they've won 2 out of 2 against Detroit this year...but this game reeks of disappointment.

To date, the Red Wings have scored 204 goals...only 61 more than the Avs. Brian Rafalski is the Wings' 5th leading scorer; he has as many points (44) as our top point producer, Ryan Smyth. Not surprisingly, Detroit has the league's #1 power play. Oh joy.

Andrew Raycroft will start for Colorado. Adam Foote may play. Darcy Tucker may not; he skipped practice yesterday for personal reasons and is "uncertain" for today's game as of this writing. The status of Foote and Tucker will probably be clear by the time this goes live, but as of right now it's too early to tell.

It's also to early to know for sure who Detroit's starting goalie will be, but I'll assume that it will be Chris Osgood. Which gives me an opportunity to post the following: 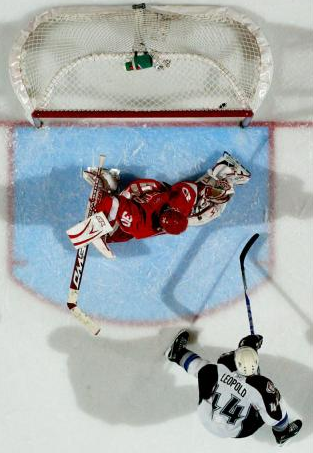