The Avalanche win a moral victory 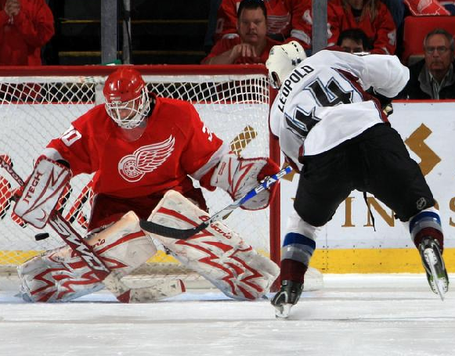 The Colorado Avalanche have had one H-E-Double-Hockey-Sticks of a week. Last Sunday, the Avs were within striking distance of a playoff spot. Four losses late - including two last-minute heartbreakers - and the team had quickly slipped from near contention to non contention. I don't know that tonight's exhilerating 6-5 shootout win will turn anything around, but if anything can serve as a catalyst, this would be it.

This series may no longer have the physical "Blood Feud" antics, but the game was still an exciting one from start to finish. Literally. The Avalanche scored just 16 seconds into the game when Chris Osgood misplayed a puck and Cody McCormick lifted a great pass to Ian Laperriere in front to give Colorado a 1-0 lead. The Avs played like a team possessed for the next five minutes or so, but couldn't punch home a second tally. Before long, Ruslan Salei and Brett Clark had teamed up to give the Wings a 5 on 3 (the Clark penalty was the first - but not the worst - big mistake by the refs on the evening). Thankfully, the Avalanche killed off the penalty and held on to their 1-0 lead at the first intermission.

The 2nd period started out the same way as the first period - with Tony Granato sending out Guite, Lappy and McCormick for the opening faceoff. And, once again, it paid dividends. This time, the line was a little more sluggish, as it took them 7 extra seconds to score (this time it was Ruslan Salei scoring an embarrassing slapper that had to send Ken Holland to start looking at goalies for a deadline trade). Just 23 seconds into the 2nd period, the Avalanche had a 2-0 lead.

Unfortunately, that was THE highlight for the Avs in the middle frame. At the 3:30 mark, Scott Hannan knocked the net off it's moorings and was sent to the box for Delay of Game. I'm not thrilled about the call, although I'm pretty sure Hannan did knock the net off intentionally. But I've seen opposing defensemen do that plenty of times agains the Avs - often far more blatantly - without earning a call. Either way, it set off a chain reaction of boneheaded plays from the Avalanche defensemen with four penalties in a 2:22 span. Hannan's delay of game came first. Daniel Cleary scored at 4:21 as Ruslan Salei was getting called for hooking. Instead of staying 5-on-4, Hannan came out of the box to earn himself an Unportsmanlike Conduct penalty, putting the Wings on their 2nd 5-on-3 of the night. They converted easily, with Cleary scoring his 2nd deflection goal in a span of 26 seconds to tie the game at 2. At 5:52, Adam Foote's high stick put the Wings on their 3rd 5-on-3, but the Avs avoided disaster and killed it off. To the Avs credit, that was their last penalty of the night.

The lousy 2nd period wasn't quite done, though. Just seconds after Chris Osgood stoned Marek Svatos all alone on a breakaway, Marian Hossa slung the puck at the net from the blueline that found it's way past Andrew Raycroft. Altidude Peter McNab said that the way Hossa shot it made it tough for Razor to see. This, of course, was utter bullshit; it was a terrible goal on an otherwise solid night for Andrew Raycroft.

The first two periods were exciting, but the 3rd period was balls-to-the-walls action. Once again, the Lappy line took the opening draw and once again, they made it happen. This time, Ben Guite drew a penalty just 9 seconds in and his teammates converted on the ensuing powerplay with Marek Svatos deflecting a Wojtek Wolski shot from just wide of the net to just inside the post. 2:32 late, Hossa put the Wings back up on top perfectly deflecting Brian Rafalski's even more perfect pass. Ben Guite tied it up at 4 again with his goal at the 6:27 mark.

This brings us to the point in the game where referee Dan O'Rourke almost won the game for Detroit. The Wings had the puck in the Avalanche zone and O'Rourke conveniently looked the other way when Mikael Samuelsson rode Guite hard into the boards and then pinned Guite to the ice. The Wings' Jiri Hudler scored while Guite was out of the play. A couple hours later, I'm still shaking my head. O'Rourke had to have a crystal-clear view of both the boarding and interference, but chose to do nothing. Amazing.

Thankfully, it didn't decide the game. Milan Hejduk tied it a shade more than three minutes later when his oh-so-slow deflection managed to just elude Chris Osgood (good thing you started making those phone calls, Ken Holland). It's worth pointing out that the play started with a good defensive play by Brett Clark in the neutral zone, mostly because I haven't been able to use "good defensive play" and "Brett Clark" in the same sentence this year.

After two straight last-minute losses, it was a bit nerve-wracking watching the clock wind down in regulation. No one scored in overtime, setting up a nail-biting shootout between two of the best shootout teams in the league. Wolski and Zetterberg both scored gorgeous goals on their attempts, but Hejduk, Svatos, Hudler and Pavel Datsyuk came up empty, extending the tension. Razor stoned Hossa, Smyth's attempt missed high and then Raycroft stopped Cleary's attempt. After four attempts, Tony Granato had no one left on his bench with a shootout try this year. Naturally, he tabbed Jordan Leopold who scored the winning goal on a penalty shot the last time the Avs were in Detroit (perhaps you've seen the picture here once or twice). Leo stayed with his forehand this time, but the result was the same - a big goal and a big win. Earlier today, from a couple of blocks away from my home, Adrian Dater wrote that he thinks Leopold may be moved soon. If so, he sure is going out with a bang. 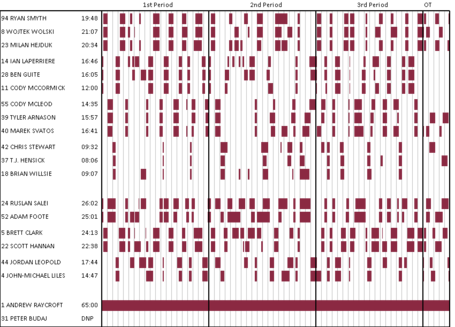 Darcy Tucker missed the game due to an illness in the family. There's no joke to be made here - I truly hope everyone is okay.

Obviously, the Lappy line was tremendous tonight. Really, all three guys have been very, very good lately. I know the Avs won in the end, but I do have to ask why none of them saw any ice time in OT or why Chris Stewart was given less than 10 minutes of ice time.

But, most of all, I'd like to ask just what Tyler Arnason was doing out there. He's been decent lately, but he was AWFUL tonight. I lost count of the number of times I saw Arnason coasting around. We've seen some lackluster efforts from Sanjaya over the years, but this one may just take the cake.

The Avalanche host the Ottawa Senators on Tuesday.

The goal 16 seconds into the game was the fastest allowed by Detroit this season. The previous fastest was 1:07, also by the Avalanche (Wolski) on Dec. 15, also at Joe Louis Arena - AP

For those counting, that's 3-0 against the Evil Empire this season. Yep, the team sitting last in the Western Conference was able to take down one of the best teams in the league three out of three times and has officially taken the season series regardless of what goes down on March 4th. - Shane Giroux, Avs Talk

Despite giving up five goals – three on deflections or tips – Andrew Raycroft was solid in the crease in snapping a personal six-game losing streak. He stopped 40 shots through the 5-minute overtime and turned back four of five shots in the shootout. - Rick Sadowski, Rocky Mountain News

The Avalanche's third line — centered by recent healthy scratch Ben Guite, with Ian Laperriere and Cody McCormick on the wings — was Colorado's best by a mile and set an energetic tone, including when a hustling McCormick set up Laperriere for the first goal only 16 seconds into the game. Guite and Laperriere both ended up with a goal and an assist, and McCormick had two assists. - Terry Frei, Denver Post

Hockey Night in Canada claims the Avalanche is shopping Ryan Smyth, and there has been plenty of speculation that Brett Clark and/or Jordan Leopold could be dealt. - Rick Sadowski, Colorado Avalanche 24/7

I’m not officially on the beat this weekend, but I can pretty much guarantee there will be at least one trade by the Avs in the next few days. The moves will start to happen, folks. - Adrian Dater, All Things Avs