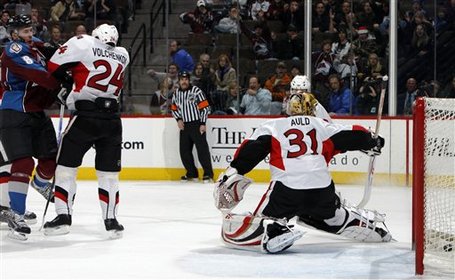 "Just when you think you are out, they drag you back in."

Oh, Colorado Avalanche, why must you tease us so? Are you has-beens? Challengers? Contenders? Buyers? Sellers? A few days ago, you were dead in the water but now you've given us just the slightest glimmer of hope with two dramatic wins. All of a sudden, 6 of the 7 teams in front of us have lost their most recent game, we've got a road trip against some questionable teams and it looks like our toothless wonder is about to return. Deep down, we know you are going to take that hope and dash it against the rocks. But, for now, you're our heroin. We know you are bad, but we're still selling our bodies on a street corner for another fix, all while muttering something about being able to kick the habit whenever we want.

Games are always a little more enjoyable when your team wins, but this one - like the Detroit game - was exciting to watch. Tony Granato again started the game with this hot new Lappy - Guite - McCormick line (for lack of anything better, I'm calling it the IBC line). Again, it resulted in a first-shift goal. Unfortunately, it was for the other team, as Ryan Shannon beat Andrew Raycroft with a terrible, bad-angle shot. That one was all on Raycroft, and just 30 seconds in I thought we'd be in for a long game.

Thankfully, Raycroft settled down quickly and was, uh, Razor-sharp the rest of the way. The only other Ottawa goal was a PP shot from Shannon that deflected off of Scott Hannan in front. The Senators only managed 22 shots - kudos to Raycroft and the Colorado defense for a solid performance.

One thing the Avalanche did a great job all night - especially early on - was keeping the puck inside the Ottawa zone. Their first goal late in the first was a direct result of this, with Cody McCormick - our new offensive dynamo - deftly stopped a Sens' clearing attempt and then fired the puck on net where Ian Laperriere masterfully deflected back past Alex Auld. The Avs have had some good grinding lines over the last couple of years, but the play of the IBC line has been simply spectacular lately.

Another positive for the Avs last night: output from all four lines. Every line had at least 4 shots on net and a couple of good scoring chances. After Tyler Arnason's horrendous outing against Detroit on Sunday, it was nice to see him put in a better effort in this one even if he didn't make it onto the scoring sheet (let's not get that carried away). Ryan Smyth (who scored the Avs' second goal), Chris Stewart and Marek Svatos all had solid games (although Stewart NEEDS MORE ICE TIME).

The game winner, though, came from Wojtek Wolski. Yet one more thing the Avalanche did well was crash the net, and Double Dub was a prime example of this; he seemed to be picking himself off the ice (or out of the net) all night long. The Baron doesn't always show a lot of emotion on the ice, but he chewed out referee Bill McCreary after a non-call on a play that sent Wolski flying into Auld and the net. Just a few seconds later, Adam Foote was whistled for a trip and Wolski was absolutely incensed. And when he banged home his own deflection in overtime, his celebration was as enthusiastic as we've ever seen from him. Maybe all this time the key was to piss Wolski off.

So, the Avs have really played well over their last 4 games and may have Paul Stastny back as early as Friday. It still seems like a long shot, but Colorado is just 7 points back from 8th place. I don't want to get my hopes up...but this damn team is making it really hard to be negative. 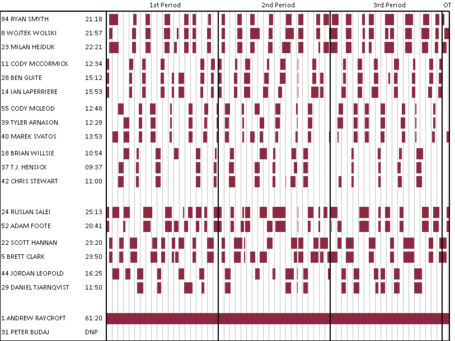 I'm really curious to see what Granato will do with the lines when Stastny returns. I think it's worth noting that Svatos had a good game against the Sens and was Wolski's linemate on the winning goal. It wouldn't shock me to see those two paired together - perhaps with Ryan Smyth - on Friday.

Granato will also have a tough call to make in terms of healthy scratches with SOS and Tucker both set to return. Yes, you and I would sit Tucker, but I'm not sure that TG will do so. If he sits anyone from the IBC line (or even shuffles that line around), he's going to get a sternly-worded letter from me, so I guess that leaves Willsie and Hensick as the odd-men out on Friday. It's too bad, because Willsie has played quite well lately. With that in mind, here's my likely-to-be-totally-wrong guess:

The next six games are on the road against Eastern Conference teams. First up, a tilt against old friend Jose Theodore in Washington.

"It's been very frustrating," said Wolski, who again centered the line between Ryan Smyth and Milan Hejduk. "I feel I've been working hard. Of late, I've been getting a lot of chances, breakaways almost every game and just haven't been able to put it in the net. I'm happy we got the win, and it's nice to contribute." - Terry Fri, Denver Post

"I've given up a whole lot of those in my career," Raycroft said. "It doesn't really rattle me too much anymore. You get upset, and I felt frustrated for giving that up. I just got caught in between and made a wrong decision." - Rick Sadowski, Rocky Mountain News

Could Dany Heatley and Jason Spezza have been more invisible on the night? Apparently Heatley had three shots, but they couldn't have been very good scoring chances, and the only moments I noticed Spezza were when he looked for an open pass with futility, eventually to lose the puck to an Avalanche player--such as what happened on Colorado's second goal, when Spezza lost the puck and then offered absolutely no defensive coverage when backchecking - Peter, Sens Army

Liles injured his wrist during a shootout win over Detroit on Sunday, and won't be with the team when they kick off a six-game, 11-day road trip at Washington on Friday night. He "could join us by the end of the road trip, best case scenario," coach Tony Granato said. - AP

"As far as the business side, I don't have much of a say in that," Leopold said. "But I will say this: Colorado's a great place, I love it here and my family likes it. I've had a good time. This year's been tough, but we can still see the daylight." - Terry Frei, Denver Post