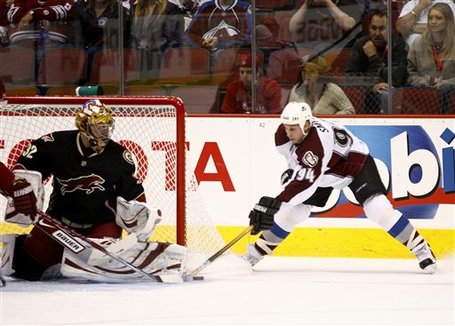 No. 1 - Ryan Smyth. Colorada needs to cut payroll and Francois Giguere is talking to teams about Smyth. The Avs won't ask Smyth to waive his no-trade unless there's a decent deal tabled. Teams are working on their offers now.

I still have a tough time picturing this happening. The Avalanche do not need to cut payroll (at least in Cap terms, although with flagging attendance, maybe Stan Kroenke has ordered the team to slash payroll). And even if Francois Giguere really did want to move the team's best player this year, Smyth is likely to be extremely picky about which teams he would waive his NTC for.  Where would he agree to go? Edmonton? Chicago, perhaps? Dallas? I just don't see it.

No matter what, though. IF Ryan Smyth gets traded, the return would need to be SUBSTANTIAL. Keep in mind, when the Oilers traded him to the Islanders, they got Robert Nilsson, Ryan O'Marra and a first round pick - two former 1st round picks and an actual pick. If it's not at least in that neighborhood, I'm going to be extremely disappointed.