Share All sharing options for: Theodore Speaks. I Yawn. 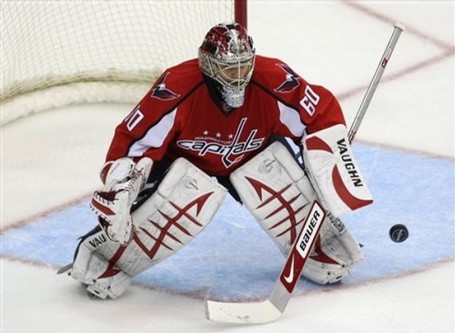 Adrian Dater is back to work, and has an article about Jose Theodore up.

Does Theodore miss the Avs?

"Look at the position I'm in now and where my game has been for the past two months. I think that pretty much speaks for itself."

"I was surprised. With the way the GM (Francois Giguere) told me I played the last three-quarters of the season, plus the playoff, and knowing that he felt that I had my game back and they wanted to keep me, that it would be easy and quick," Theodore said. "At that time, I wanted to stay there. I think he thought that I didn't have any options.

"A couple of days before (free agency on July 1), I was really disappointed in (Colorado's offer), so I had some discussions directly with Francois, but even in the discussion, some of the things he would bring up, I was really disappointed. It was two years at 3.5 or, at the end, three years at 3.5. That was it. The direction the Caps were going — unless Colorado came back and made a big effort — my mind was pretty much set. We (players) have some pride, and when we see they don't make that extra effort to really show you that they want you, then you decide, 'Hey, I'm going to move on.' "

Good Lord, somebody call a Wahmbulance. Geez, I can't understand at all why Giguere would be worried about worrying about getting a return on his investment. I mean, after all, you were really good in the last 3/4 of ONE FREAKING SEASON.

Look, I've said this before and I'll say it again here: Peter Budaj has been a disappointment of late. I think he's getting a bit of a raw deal from some fans, but such is life - his numbers are his numbers. But anyone who thinks Jose Theodore would be a significant improvement is smoking a bit too much wacky tobaccky. WOW, Theodore has a 2.78 GAA? Super cool - so do 26 other NHL goalies. NEATO, a .901 save percentage! That's way better than...TEN OTHER GOALIES! Let's be clear - that's the same old Theodore in net and the Caps are doing well mostly because they are the 5th-highest scoring team in the league. Theo has been, as usual, maddeningly inconsistent and has only recently started to find his game (again). At the end of December, Theo had a GAA of 3.08 and a save percentage of .889. Budaj, at that time, was at 2.73 and .902 - almost identical to the Theodore numbers AD is fawning over now. And wow, all that for just an extra $3.8 million! Ooh, where do I sign?

It's all very simple. Theodore got almost exactly what I thought he would get on the open market. The Capitals were willing to pay that much, the Avalanche were not. I'm happy for Theodore and sincerely wish him all the best. But, frankly, I'm glad his inconsistent ass is parked in front of someone else's net; I have enough grey hairs as it is. Is Budaj the answer? I still say "maybe", others say "no". Fine. Let's find another new scapegoat goalie. But, let's stop regurgitating this Theodore nonesense. Please. It's really starting to harsh my calm.