[Ed's Note: Today marks the introduction of semi-regular new series at the M Double H ranch: Today In Colorado Avalanche History. The title is self-explanatory (I hope). The schedule will be a little erratic on these. I won't necessarily be doing one every day, or covering every single noteable event. Some days - like today - there may be more than one entry. Others, none at all. Enjoy.] 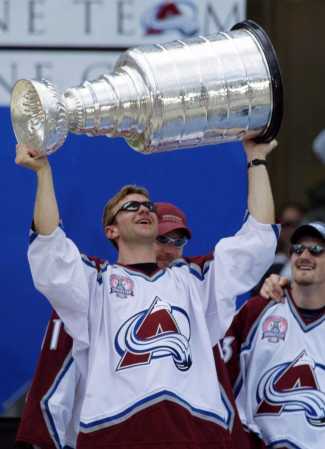 February 21, 2001 - In a surprise move, the Colorado Avalanche acquired Rob Blake and Steven Reinprecht from the Los Angeles Kings for Adam Deadmarsh, Aaron Miller, a 2001 1st round pick (David Steckel), a 2003 1st round pick (Brian Boyle) and a player to be named later (Jared Aulin). In 4+ seasons with the Avalanche (regular season and playoffs), Blake played in 390 games, scoring 78 goals and 173 assists and landed one large, silver trophy.