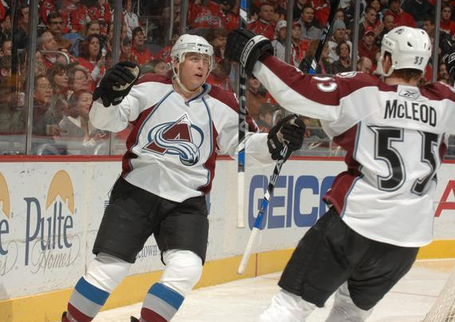 It would be easy to make this about Jose Theodore and the odd way that he chose to prove how under appreciated he was. And I'll admit, I was tempted. But even though Theodore wasn't all that great - certainly not $4.5 million great - I don't think that's the story of the game.

Just glancing around at some quotes and recaps, it sounds like a lot of people felt the Caps didn't play very well. Perhaps that's true, but I still thought they looked pretty damn good. The Avalanche seemed to be focused the entire game on getting pucks out of the zone and up the ice, and it really illustrates just how good the team can be defensively when they put their collective minds to it. Brett Clark and Scott Hannan got the call against Alex Ovechkin all night and did a GREAT job; of the 11 shots he took, only 5 made it to the net, and none made it past Andrew Raycroft (who was, hands down, the better of the two goalies).

The Avalanche played a very smart game - the Capitals had only two abbreviated powerplays in the game. The second one, early in the 3rd period, was where Razor was at his best, stopping 4 big shots to preserves the Avs 3-1 lead (at the time).

Although it wasn't an incredibly nasty game, there was an incident late in the game when Nicklas Backstrom blindsided Wojtek Wolski with a hit up high. It was a blatant intereference penalty (as well as a completely gutless, douchy move) and Wolski went right after Backstrom. Backstrom, in another completely gutless, douchy move, simply cowered until Ovechkin could come over and pry Wolski off of his back. Why was Wolski so angry? Probably because the play was very reminiscent of the Craig Conroy cheapshot that gave him a concussion a couple of years back. At least the refs called this one. Anyway, I, for one, love the new feistiness from Wolski.

And I love the way the Avs are playing lately. They are just 5 back as of right now. It's still going to be a tall order to pass 7 other teams, so I'm not really looking at the standings. I'll be happy to watch them continue to play well and just see how things fall. 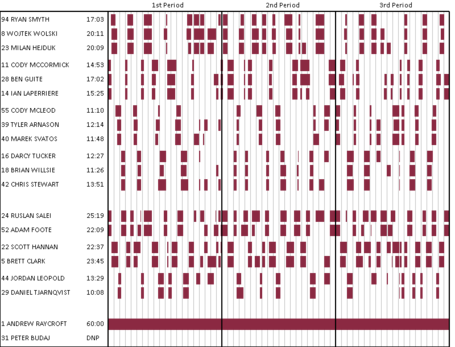 Darcy Tucker returned to the lineup, sending TJ Hensick to the press box and shifting Brian Willsie to center for (I think) the first time this year.

The Avalanche will be in Raleigh on Sunday to play the Hurricanes. To continue the recent theme, the 'Canes have won 2 straight by a combined score of 10-3

Andrew Raycroft was the best goalie on the ice in the duel with Theodore, and four Avs players scored goals in the satisfying victory. The familiar trumpeting start to Johnny Cash's "Ring of Fire" blasted from a jubilant Avs dressing room when all was said and done, with Theodore's gloats of the previous day officially up in smoke. - Adrian Dater, Denver Post

“Obviously, it was my former team and I came ready to play. We didn’t do as well as we wanted. On the other side, I thought they played a really solid game.” - Jose Theodore

"We played a team that we have a lot of respect for and we had to be at our best," Granato said. "I thought, from start to finish, it was probably as solid a game as we've played all year." - Rick Sadowski, Rocky Mountain News.

"We had nothing; we were horrible out there," Boudreau snapped. "Everybody had their bad game at the same time. You win a lot of games in a row, you're going to have a stinker. Today was it. They played their game to a 'T'," he added. "I don't know if they made us look bad or we were just real bad." Tarik El-Bahir, Capitals Insider

Come playoff time, the Caps are going to have to play a slow it down grind it out type of game like Colorado forced them into last night. The wide-open freewheeling style that they enjoy will get them into trouble as teams will fight for every inch of the ice and pack in things in front of their own goaltender. - Caps Nut, Bleatings From a Caps Nut

But if [the Capitals are] not worried about the way they've played some of the League's lesser lights, they're fooling themselves, because the difference between the Avs, Kings, Oilers, et. al. and whomever they're going to draw in the first round of the playoffs might be a lot less than they think. - JP, Japer's Rink