The Avalanche get a solid caning 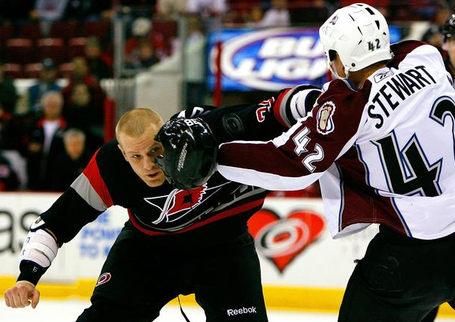 "Well that wasn't much of a noise. Normally everybody tried to play too safe." - Art of Noise, Instruments of Darkness

Welcome back to earth, fellow Avalanche fans. I hope you enjoyed your time in playoff fantasy land. We had sort of an abrupt re-entry - is everyone okay?

The Avalanche followed up one of their best games of the seasons with...guh. It started out well, with Wojtek Wolski beating Cam Ward just 59 seconds into the game. The Avs seemed to have some hustle to their flow and were hitting everything that moved. Unfortunately, their game quickly devolved from "tough" to "stupid". The Avalanche took five minor penalties in the first period, and 9 in the game. Although Carolina never converted on any of their 8 powerplays, all the time they had with the man advantage seemed to swing the momentum into the Hurricanes' favor, and the Avalanche never recovered.

The Avs mustered only 11 shots through the first two periods. Carolina had 28. Andrew Raycroft kept the Avs in the game as long as he could, but he couldn't hold them off forever. Joni Pitkanen broke a 2-2 tie at the 17:06 mark of the 2nd period and that would end up as the game winner. Ryan Bayda scored in the 3rd to make it 4-2 and Matt Cullen added an empty netter at the end to seal the deal. Cullen's goal was the first hat trick of the season in an Avalanche game. Forgive me if I don't wave my pom poms. 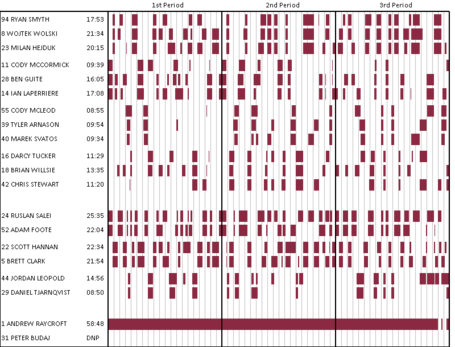 Colorado had its three-game winning streak snapped and lost for the first time in 16 games to Carolina. The Avalanche entered 12-0-3 against the Hurricanes, last losing to the franchise in 1996, when the Hurricanes were the Hartford Whalers. - AP

The last time the Carolina Hurricanes beat the Colorado Avalanche, Matt Cullen was 19 years old and playing college hockey at St. Cloud State. Of course, they weren't the Hurricanes then. In February 1996, they were still the Hartford Whalers when they beat the Avs. Thirteen years later, Cullen is in his 11th year in the NHL, a veteran who cringes a bit when called "grizzled." And until Sunday, he had gone 785 games in the NHL without a hat trick. - Chip Alexander, News & Observer

The game started off a bit auspiciously as Wojtek Wolski scored for Colorado just a minute into the game on the team's very first shot.  The Canes looked a bit flat, but Tim Conboy fought for the third time in the last three games and the crowd, as well as the team, fed off the energy. - Bubba, Canes Country

Carolina’s Tim Conboy got the crowd into the game a few minutes later when he and Colorado’s Chris Stewart dropped the gloves and went at it.  Neither player got any good shots in, but it woke the Canes up. Jared Brooks, 850 The Buzz

"Wish they'd (have) let us play a little more, but they called it tight," said Avalanche coach Tony Granato, whose team remains last in the Western Conference. "All those power plays gave them momentum, gave them life. We did a good job killing penalties, but it took a lot of energy out of us." - Adrian Dater, Denver Post

"I thought physically we played extremely hard early," coach Tony Granato said. "We didn't play the smartest game; we played hard. Obviously, the momentum they got from being on the power play pretty much in the first period - it seemed like all night - they did a good job and made some plays." - Rick Sadowski, Rocky Mountain News

Negotiations have been ongoing between Ian Laperriere and Avalanche management toward a contract extension. But no agreement has been reached, and Laperriere is aware he could be dealt to another team by the NHL's March 4 trade deadline if one can't be made. But Laperriere made it clear after Sunday's 5-2 defeat to the Carolina Hurricanes that he wants to finish his career with the Avalanche. - Adrian Dater, Denver Post

Question to Av-Aholics: Should Lappy be given an extension, at or above his current $1.15 million, which is what he wants? Or, should he, at age 35 and of possible value to a contender this year, be sent packing for a prospect/pick/whomever? - Adrian Dater, All Things Avs

How about that heart shown by Ian Laperriere at the end of the first period? Blocks two shots, can barely move, but gets up and helps kill off the rest of the penalty. This is why Lappy should be re-signed, not traded or just let go. - Adrian Dater, All Things Avs [Ed's note: Amen, brother]

Avs center Paul Stastny (broken forearm) sat out Sunday's game, but chances are good he will return to the lineup Tuesday against the Atlanta Thrashers. - Adrian Dater, Denver Post