The Night The Lights went out in Georgia 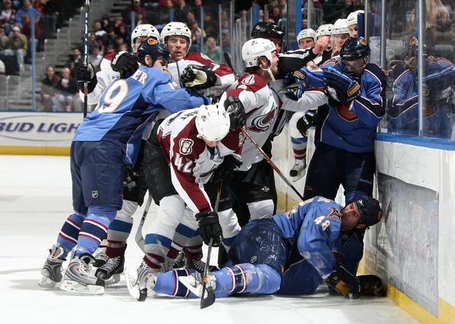 The Avalanche had some fight...but it wasn't enough

Well, its been ten years and maybe more
Since I first set eyes on you;
The best years of my life gone by,
Here I am alone and blue.

And there you have it, folks. The Heartbreaker. We knew it was coming, although our beloved Avs kept delaying it by giving us random glimmers of hope. I'll admit, I thought the Avs might just pull it off this year, but no more. Elvis has left the building. The circus has left town.

The early part of the game personified the Avs' season perfectly. The Avalanche had a couple of early scoring chances, but two players (Hejduk and...I can't recall) missed wide open nets. Colorado's hard work paid off with an early powerplay, and you felt that the Avs were going to be in good shape. Suddenly, the Avalanche get a little sloppy - just a little - and a routine PK dump in turns into a shorthanded scoring chance. 1:10 later, with the Avalanche still trying to figure out how they were down a goal, Ilya Kovalchuk deflected a Niclas Havelid shot past a stunned Peter Budaj.

That 2nd goal was a killer in more ways than one. I backed my Tivo up a couple of times and I have to report that the body language the guys on the ice showed after the ice was about as bad as you'll see all year. Most noticeable to me was Adam Foote and Peter Budaj, both of whom looked completely dejected. The goal itself...well, it's hard to really fault Budaj on that goal. But, with so many disappointing goals given up this year, the floodgates of blame and despair finally burst open. To add insult to injury, 30 seconds later Darcy Tucker took a stupid goalie interference penalty; the Thrashers didn't convert, but it was a good example of what a terrible signing Tucker was (illustrated even better later on when Chris Stewart had to get around an idle Tucker to come to the aid of a teammate).

The Thrashers made it 3-0 at the 11:20 mark and the route was on. Honestly, I was expecting Budaj to get pulled here, but Granato stayed with him. It seemed like that might pay off when Budaj turned his game around in the second, making several tremendous saves to keep his team within striking distance. Meanwhile, Milan Hejduk scored a couple of goals to cut the lead to 3-2 and that glimmering hope mentioned above was starting to pulsate again. And then Rich Peverly snuffed out the light with the second Thrashers' shorthanded goal of the night. Game. Set. Match. Season.

Chris Stewart - who DID get the minutes I called for yesterday - added a late goal to make it 4-3, but it was too little too late. For the umpteenth time this year, the Avs threw up a lot of shots (33) but couldn't get enough to go through. The Avalanche are currently 16th in the league in shots taken, but 21st in goals scored. That 5-spot drop isn't quite the worst in the league (the Rangers, for example, are 6th in shots and 30th in scoring), but it's up there (tied for 8th). The Avs have made a lot of so-so goalies look good this year (*me waves to Kari Lehtonen*) and, as I've postulated before, the scoring difficulties have a lot to do with where we are in the standings today. 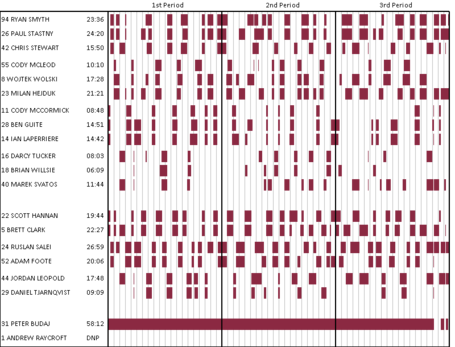 Paul Stastny returned to the lineup and looked solid. At the start of the game, Peter McNab indicated that Granato was looking to keep SOS around the 18 minute mark in minutes. Instead, he played 24:20, more than any forward in the game.

Tyler Arnason was the somewhat surprise scratch along with Hensick. Instead of Arnason, Brian Willsie centered Svatos with Darcy Tucker moping along on the wing. It was...interesting.

Predictably, the lines were shuffled extensively througout the game.

The Avalanche are in New Jersey on Thursday to face the Devils.

The Thrashers won for just the fifth time in their last 21 games at Philips Arena. - AP

The Thrashers have found a novel way to jump-start their offense: Give the other team a power play. - Mike Knobler, Atlanta Journal-Consitution

Avs "power" play is the difference in this game - Americanario, MHH Quote of the Night

"When you don't execute, bad things happen to your team," Avs coach Tony Granato said. "Two short-handed goals, and running around defensively — that's what it leads to. I think the power play was the story. We just weren't sharp and didn't execute." - Adrian Dater, Denver Post

Today, the Avs gave their best impression of a team who could care less about attempting to make the playoffs, at least in the first period. - Adam Hersh, An Avalanche of Thoughts

"We are so many points behind," Hejduk said. "It's not fun, but we'll battle to the end." - Rick Sadowski, Rocky Mountain News

Rumor is the Avs are going to be involved a big, multi-player deal involving an eastern team real soon. Boston or Pittsburgh are the runaway favorite teams said to be likely to be involved. I still can’t get rid of my Chris Drury itch, either. I know that Francois Giguere loves him. But as much I love Drury, too, it’s probably not a great deal for a team like the Avs right now. And I doubt Drury would OK any deal out of New York. But I still rumor-monger about him a bit, I’ll admit. - Adrian Dater, All Things Avs

Avalanche defenseman John-Michael Liles, out since Feb. 15 with an injured wrist, will practice with the team today. The team might then determine whether he can play in Thursday's game at New Jersey. Rookie Darcy Campbell, who did not play for the Avs since being recalled from Lake Erie (AHL) in Liles' absence, was sent back down to the Monsters. - Adrian Dater, Denver Post

Hensick has been scratched three games in a row and five times in the past seven. He has no goals and three assists in his past nine games. - Rick Sadowski, Rocky Mountain News

Last summer everyone was in agreement that the honorable thing for Theodore to do would be to take a pay cut, since the Avs paid him $6M and he was good for about 1/2 a season. Well Laperriere was paid well under what he should have been paid, so even if he's 35 the Avs should show him some loyalty by giving him some extra dough. I'd much rather overpay for him than some of the other guys we have overpaid for. - Jibblescribbits

The fans clearly want [Lappy] back. He's popular, does a million off-the-ice charity things that most people don't see and has had a good year on the ice. He is Braveheart on skates, the guy who will throw his body in front of a screaming slap shot with no second thought or fight the guy who just hit a teammate a little too hard for his liking. - Adrian Dater, Denver Post