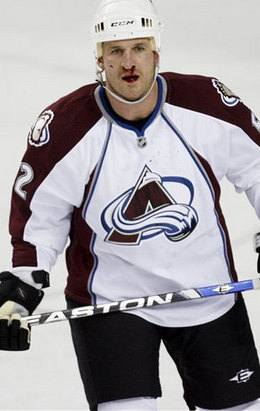 February 26, 2008 - The Colorado Avalanche make two moves to bolster a struggling defense. First, they sent Karlis Skrastins and a 2008 3rd round pick (Adam Comrie) to the Panthers for Ruslan Salei. Then, they acquired long-time Av Adam Foote from the Columbus Blue Jackets for a 2008 1st rounder (Luca Sbisa) and a 2009 4th rounder. Salei wouldn't join the team until the next day. Foote flew to Calgary that night and famously joined the game in progress, arriving on the bench midway through the 1st period.