The Super Bowl From A Hockey Fan's Perspective

Share All sharing options for: The Super Bowl From A Hockey Fan's Perspective 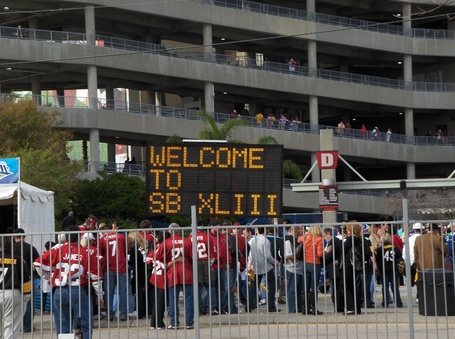 The title is actually a bit misleading, because I grew up a diehard football fan and still follow the game a great deal. But I've never had a lot of use for the massive hype of the Super Bowl and lately I don't even bother with watching if the Patriots aren't involved.

So, I reacted with a bit of bemused indifference when I found out I'd won a trip to Super Bowl XLIII in Tampa through a sales contest at work. I had to go, if only to be able to say that I'd been to one in my lifetime. However, I was probably more excited for the weekend getaway to someplace warm with my wife (she was able to join me on the trip but not the game).

As it turns out, the weather wasn't all that great. Although we mostly avoided any rain, it was cool enough that my shorts never made it out of the suitcase. Still, it was nicer than the snowy mess we had left behind (this is my driveway on the morning we flew out). We stayed in downtown St Petersburg, about 20 minutes from Tampa. While there was some Super Bowl stuff around, I was surprised that there weren't a lot of people. For example, we spent Friday morning at a popular tourist spot called The Pier...and there were more pelicans than people.

We did have one chance encounter that was kind of cool. While shopping for Super Bowl swag (I bought this crazy thing), we bumped into a guy wearing a Patriots Super Bowl ring. It turns out, he is the Pats' dentist, and was gracious enough to let us try on the massive thing. We tried to do the whole Vladimir Putin thing by muttering something in Russian and wandering off, but it didn't work. In case you are curious, that ring was from the Super Bowl XXXVIII victory over the Panthers.

By Friday night, the buzz was increasing. At a park down the street from us, there was a free Hoobastank concert and some clubs in the area seemed to be hosting parties. We ended up just crashing back at the hotel, although I did enjoy watching the local news that night as they jumped around from party to party in Tampa interviewing an amazing mish-mash of athletes and celebrities (one station, for example, went from showing Jerry Rice to Jared the Subway guy). It seemed like anybody who was anybody was in Tampa...along with a hell of a lot of nobodies who thought they were somebody.

On Saturday, we walked down to a local farmers' market and finally we began to see some football fans (Steeler jerseys outnumbered Cardinals jerseys by a wide margin), although not as many as I was expecting. Again, it may have been the weather (note the gloves that several bandmembers are wearing) or maybe they were just all closer to the action in Tampa. The park that was hopping the night before for the concert was now mostly empty now, save for a depressingly large congregation of the homeless. There was still free entertainment, but not many were around to enjoy it. And I don't really know what the story was with this guy but the getup was tremendous.

Sunday, of course, was game day. We all loaded up around 1. That's me, 2nd from the right. It's kind of hard to see in that photo, but I'm wearing my Avs jersey (here's a better view). More on that in a bit. We were all a bit worried about the traffic, but we pretty much got right in without any problem. There was a bit of of congestion as we approached the stadium and a little confusion on where to go (also, check out the yellow Lambourghini a couple cars ahead of us), but it was essentially painless. Leaving was the same - we drove right out without any wait at all and were back at our hotel in under 30 minutes.

It didn't take us long to get inside. There was a little line snaking around the outside  that maybe took us 20 minutes to get through. It was fun to see all the fans decked out in their gear, and some even brought cool props. Also, about every 5 feet someone was holding a bible and preaching to us. That was...odd.

Once inside, I split from my group and just wandered around, taking in the sights and sounds. We got to roam around the NFL Experience and that was kind of fun [SB 60]. There was entertainment and exhibits, but honestly I just...enjoyed ... watching ... all ... the ... people.  There were a few celebs kicking around. Some working, and some just there, I think, for the game.

I never did see anyone else with a hockey jersey on (not too many Broncos fans either). However, I did have a few people shout "Go Avs" as I was walking by. Right after I took this photo, the woman on stilts came rushing over to give me an extra-tall high five. She was from Denver. At any rate, the only hockey jerseys I saw besides my own were these two Lightning jerseys hanging up in a merchandise booth. There were, of course, plenty of football jerseys. For the Steelers, the jersey du jour was clearly Troy Polamalu, although I saw everything from Bradshaw to Bleier. Strangely, though, the old-school Steeler most represented was Jack Lambert, whose 58 was everywhere. Larry Fitzgerald seemed to be the best represented on the Arizona side of things, although these three fellas were all sporting Domique Rodgers-Cromartie jerseys

After some pre-game "entertainment", everyone got the green light to make their way into the stadium. And boy, was it ever nice. Seriously. I mean it. My seats were in the corner above the Pittsburgh end zone, and the view was great. The Steelers fans were out in full force - everyone had a Terrible Towel - and I have to say I was as surprised by their friendliness as I was impressed by their passion. This one Pittsburgh fan in front of us (shown here with his dad, and yes, people we're shouting "Blue!" all night long) was really friendly and gave us a lot of insight about Pittsburgh fans throughout the game. To be honest, he thought we were Cardinals fans and I didn't tell him we were Patriots fans until the very end, but I think he would have been cool anyway. When the Cardinals came back late in the game, some of the fans took it a little hard - I thought this guy was going to throw up. But then Santonio Holmes made everything okay. Honestly, I was kind of glad to see it work out for them. And yes, it feels kind of dirty to admit that.

I've written so much already, and I haven't even talked about the game itself. It was a lot of fun, especially that ultra-tense 4th quarter. Even as a neutral observer, it was impossible not to start high-fiving people when Larry Fitzgerald scored that long, late TD. As for the half-time entertainment, I'm not the biggest Springsteen fan in the world, but I enjoyed his performance. We didn't stick around long after the game, skipping most of the post-game activities as we wanted to beat the rush, even though it turned out to be a non-issue.

I had an absolute blast. Although I went more to satisfy some sort of "guy" responsiblities - you don't turn down a free ticket to the Super Bowl - I enjoyed myself. While I can do without all the hype while watching on TV, it was a blast to see in person - the fireworks, the anthem, the roar of the Thunderbirds flying overhead...it was all exceptionally entertaining. The NFL and the city of Tampa put on a great show. I'll say this: if I'm ever lucky enough to get that sort of opportunity again, I won't hesitate.