The Avs' Snipers get it done 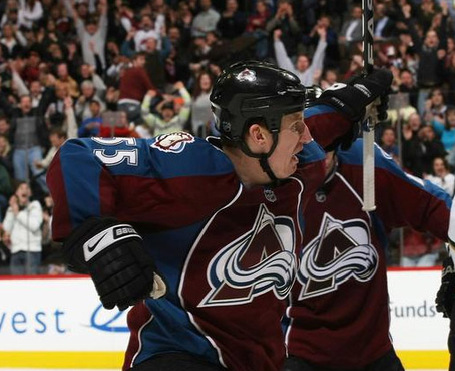 Man, it's been a while. Let's see if my Magic Extemporaneous Word Generator button is still working. It appears that all systems are go, so let's fire this baby up.

Mired in 14th place (and with a chance to fall to 15th last night), the Avalanche are basically looking at a must-win game in each of their final 30 games. Last night, they bumped off the Dallas Stars, 3-2. I can't say that it was the best-looking of victories, but the Avalanche need wins, not style points.

You might have read yesterday that Tony Granato was looking for his players to get physical with the Stars. I'm not sure that message trickled all the way down, because other than a couple of Ruslan Salei blasts, there wasn't much hitting.

From my vantage point on the sofa, the game seemed pretty evenly played. It looked like we were headed for a scoreless first period when Steve Ott buried a beautiful deflection past a powerless Peter Budaj. Milan Hejduk tied it up a little past the midway point of the 2nd when he grabbed a puck from the sideboards and was allowed to skate all alone on net. When Stars' goalie Marty Turco laid down to get his belly rubbed, Hejduk calmly fired it top shelf to notch his 20th goal of the season.

The teams were knotted up at 1 after two periods, but it didn't stay that way for long. The Avs started the 3rd period with some remaining time on an Ott penalty. 42 seconds in, all 4 Dallas skaters converged on a loose puck in front of Turco and not one of them could corral it. Instead, it found it's way to Marek Svatos behind the pigpile and he had no problem rifling it past Turco to give the Avs a 2-1 lead. Dallas tied it at the 8:02 mark when - to paraphrase Daryl Reaugh - Brett Clark went all numb and was slow to pick up his man. His man was Loui Erickson who entered the game with 24 goals. Thanks to Clark, he left the game with 25.

But the Avalanche have snipers too. One of them is Cody McLeod. At the 12:49 mark, Tyler Arnason won a key offensive draw, cycled the puck to McLeod behind the net and Cody Mac beat Turco to the front. That would be the game winner, as the Avs held them off the rest of the way.

Again, it wasn't the prettiest win of the year. I don't think either team (or goalie) played all that well. But two points is two points, and the Avs have lost so many more games that they should have won than the other way around. So, the home stand was a 3-5 disaster and the Avs are still long shot to make the playoffs. But they got two points have a massive two-game winning streak, so maybe, just maybe, they can put together yet another late-season run. 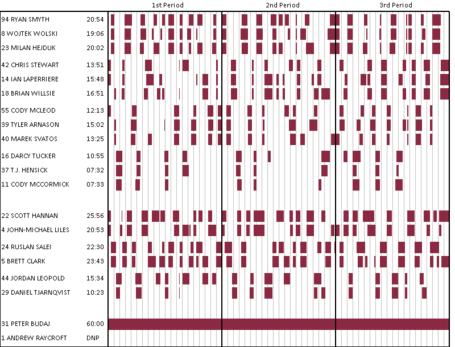 There was a little scare at one point when Ryan Smyth slid hard into the boards, a play eerily reminiscent of the David Jones injury. Smyth skated of gingerly and went right to the dressing room, and, honestly, I was thinking the season was done right there. But he came back almost immediately.

I think I missed some Adam Foote updates while I was away. I assume he's relatively close to returning, as the Avs are carrying just 6 defensemen.

The Avs will travel to St Louis on Saturday, their first road game since the Blues embarrassed them on January 15th. The good news? The Avalanche own Saturdays. The Avs had won eight straight on Saturday before losing to the Ducks last weekend.

With 30 games to play in the regular season, the Avalanche is a mere three points behind eighth-place Vancouver in the Western Conference, but five other teams are at least that close to the Canucks, and last-place St. Louis is only six points in arrears. - Rick Sadowski, Rocky Mountain News

Unlike several games of late, though, the Avs didn't sag after allowing a tough third-period goal. They kept putting some pressure on Turco, with McLeod slipping in behind a slow-reacting Dallas defense. - Adrian Dater, Denver Post

McLeod - one of just two players in the NHL this season with at least 10 goals and 100 penalty minutes - scored his 12th goal of the season when he took a pass from Tyler Arnason and banked it in off a Dallas defenseman. - AP

Hejduk, however, was sad to hear of Peter Forsberg's continued foot problems. When told of Forsberg's difficulties playing in a game Wednesday with his Swedish team, Modo, Hejduk said: "It's too bad. He's tried so hard, and we all saw what he went through with us to play. He just wants to play hockey. I hope he can still." - Adrian Dater, Denver Post

From the start of the game the Avalanche were getting plenty of room to the front of the net and were causing havoc off rebounds and scrambles in the slot. If Marty Turco had not been extremely sharp early on the Avs could easily have been up by two goals in the first period. - Brandon Worely, Defending Big D

After the Stars were felled 3-2 by the Colorado Avalanche in a dull game at a half-full Pepsi Center, Dallas players and coaches bemoaned the fact that they missed a great opportunity by not giving their best effort. - Mike Heika, Dallas Star-Telegram

Colorado has scored a power-play goal in four straight games, marking a season high. The Avs went 1-for-2 with the man-advantage tonight, making the club 8-for-28 (28.6%) in its last seven contests. - Craig Stancher, ColoradoAvalanche.com

The Avalanche will play 10 of the next 12 games on the road, beginning Saturday at St. Louis. The only home games in this stretch are Feb. 13 against Montreal and Feb. 17 against Ottawa. - Rick Sadowski, Rocky Mountain News