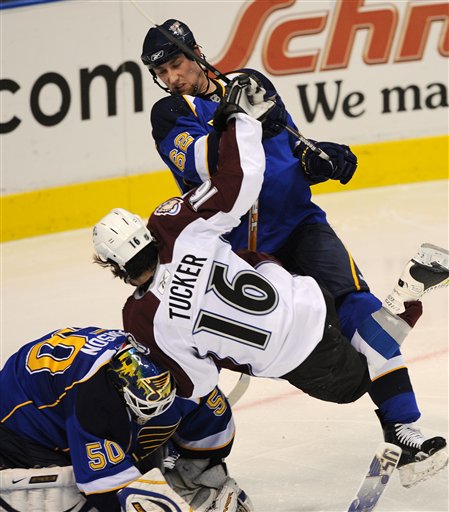 The Colorado Avalanche gave about 20 minutes of effort tonight, so I will return the favor by doing just 1/3 of my normal recap.

The Avs played lights out in the first period, with Chris Stewart converting beautiful passes from Wojtek Wolski and Ryan Smyth into a pretty goal. Peter Budaj was in fine form and the defense was playing well.

But when the teams came out for the 2nd period, things changed in a hurry. The Avalanche had 3 defensemen on the ice and yet not one of them could pick up a wide open TJ Oshie standing next to Peter Budaj. Seriously? Then Jordan Leopold turtled against some pressure by the oversized monster that is Brad Boyes, leading to a Keith Tkachuk blast. And, 30 seconds later, the Avs defense was running around with their collective heads up their asses before Boyes mercifully ended it with a nasty forward to backhand move. In less than 5 minutes the Avs had gone from a 1 goal lead to down 3-1.

To add insult to injury, Milan Hejduk left the game after getting hit in the head. Oh, and the Kings and Blue Jackets both won and it looks like the Canucks will do the same. Next up: Columbus on Tuesday.