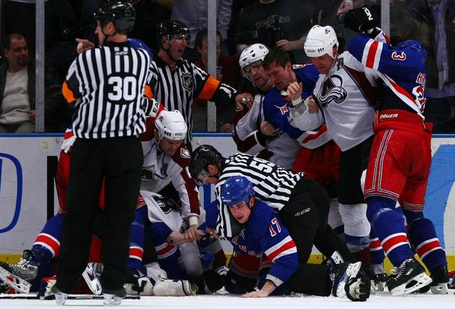 "Oh, hell’s kitchen is a crazy place
I ain’t never coming back, oh no no"

I didn't watch a lot of this game. I mostly watched the first 5 minutes and the last 5 minutes. It looks like that's all I needed to see.

No question about it - the Avs are playing terrible hockey at the moment. The Avs had as many shots (4) as goals allowed in the first period. Awful. If you tuned in a little late to this one, it may well have been over already. 28 seconds in, a combination of terrible defense and poor goaltending combined to give the Rangers a 1-0 lead. Yuck.

Instead of going on about a game I barely watched, I want to talk about leadership. It's really tough for us as fans to evaluate. We're not in the locker rooms and we're not on the ice. We hear stuff about the leadership of, say, a Joe Sakic, but it's tough to evaluate just what each player is contributing in that area, especially when there are so many diverse personalities in a locker room. Perhaps player don't care for Ian Laperriere's happy demeanor as much as we do. Maybe Ryan Smyth's "play for what's on front of the jersey" schtick doesn't play as well to his teammates as it does for Peter McNab. I doubt I'll ever know, but I am certain of one thing: the Avs really have nothing to play for but pride, and those two guys are still in all-out-full-tilt-don't-hold-back-mother-fucker mode. I am guessing they do indeed have the respect of their teammates in the locker room, but even if they do not, they absolutely have my unending respect for the way they have continued to play on the ice.

Some of the other "leaders"? Not so much. Darcy Tucker was supposed to bring "scoring ability and a physical presence up front." He hasn't brought either. We thought maybe there'd be some leadership qualities there as well, but that doesn't seem to be the case. Did anyone catch his interview with Mike Haynes before the game? I'm not sure he made eye contact with either Haynes or the camera one time during the entire interview. Frankly, he came across like a guy who knows his time with this team is just about up...and that separation can't come soon enough for him (or me, for that matter).

A long-time leader of the Avalanche is Adam Foote, who returned just over a year ago and was, in my opinion, the single biggest reason behind the Avs win over the Wild in the 1st round of the playoffs. But he has been inconsistent at best this year and, frankly, comes across far too often of late as a guy just punching a time clock to collect a paycheck. Footer, one of our alternate captains, came on to the ice immediately following that dreadful first goal. The Avs were in desperate need of someone to calm them down, and who better than our veteran defensive stalwart? Well, if you were to base your opinion on that shift, the answer would be "pretty much anyone". Foote was awful. He first got caught down low along the sideboards. As he was chasing down someone for a hit, the play went the other way, leaving Chris Stewart to get back on defense. Foote gets back, but gets knocked off the puck by Nikolai Zherdev and turns it over. He gets a chance to redeem himself as the play continues, but Lauri Korpikoski simply outhustles him to a loose puck in the corner. Finally, after Korpikoski threw the puck in front of the net, Foote moved way out of position to lay on a check. He was behind the net on the wrong side of the ice when Zherdev scored to make it 2-0. While they still had to play the remaining 58:57 to make it official, this game was over and that was the winning goal. While we can't tell who is leading off ice, we can sure see who is setting an example on the ice, and that shift was not awe-inspiring at all.

The madcap hijincks at the end of the game was entertaining, overdue, scary and somewhat sad all at the same time. It started (well, officially, anyway) with a Cody McCormick cross-check to the face of Fredrick Sjostrom. From there, it degenerated quickly with numerous fights and ejections - if my tally is right, 9 players finished the game in the dressing room. The highlight was probably Laperriere beating Brandon Dubinsky (I think) with his elbow pad. The lowlight was probably Tucker getting tossed easily to the ice by Paul Mara. Unquestionably, the Avs are a frustrated team right now and all that craziness is the result.

I don't have the report done. Willsie and Tjarnqvist were scratched and Hensick was sent down for a 2-game conditioning assignment. Liles returned from injury and Svatos and Arnason returned from the press box.

It's the last Avalanche game before the deadline and also the end of the worst road trip of all time (unofficially): the Avs are in Long Island on Monday to take on the lowly Islanders.

"When we don't come out and dictate the pace, and (don't) come out and be physical early in games, and get on our heels, that's what happens to us," Granato said. "They came flying, but we didn't do anything to respond to it." - Terry Frei, Denver Post

Since Feb. 13, a span of eight games, the goal-challenged Rangers hadn't scored more than twice in regulation in eight games. - Steve Zipay, Newsday.com

Tortorella, who took over Monday for the fired Tom Renney, dropped a pair of 2-1 decisions before seeing his aggressive style produce the Rangers' highest scoring output this season. - AP

Mara's fight closed the card that included three pervious melees and/or fights within a span of three minutes as the game wound down. Plus, Schoenfeld screamed from the bench at Ian Laperriere in what most would consider a breach of conduct. - Larry Brooks, NY Post

I'm leaving after two periods of this slaughtering to go see a Clippers game. That's how bad this team is right now. I would rather watch the Los Angeles Clippers. Au revoir. - Adam Hersh, An Avalanche of Thoughts

Of course, the skeptics will note that the Avalanche is a team in such distress that a few hundred snowplows could not shovel away all their troubles. But what really matters is that Torts' lads immediately went for the jugular early in the first period —  didn't have any goals disallowed for questionable high stcks — and never let up against a team that HAD to be vanquished. - Stan Fishler, Game On!

In practice on Friday, interim assistant coach Jim Schoenfeld took half the team onto the ice for some odd-looking drills, one of which consisted of backup goalie Steve Valiquette lying on his side while players tried to score over top of him, and some players putting their head against the ice in order to see what the puck sees. The idea was to give the Rangers, mired for a month in a painful and persistent scoring slump, some new angles to think about. Those drills also turned out to be ideal preparation for the Colorado Avalanche, whose goalies may as well have been lying on their side Saturday night as the Rangers scored from just about every angle there is. - Michael Obernauer, NY Daily News

In this economy, the Avs may be as stuck with a couple of contracts like the Federal Reserve is stuck with a whole lot of sub-prime mortgages right now. Brett Clark is proving very difficult to move. He’s finishing up an awful season offensively, and he’s making $3.5 million this year and next. With many teams very worried about their economic situations going forward, Brett Clark just is not a good sell to NHL owners right now. - Adrian Dater, All Things Avs