One step closer to Hedman 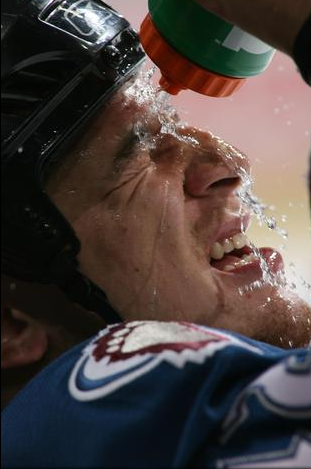 I don't get it. With the exception of one player - Matt Hendricks - this is the exact same group of guys that looked so...so...competent on Sunday against Chicago. What happened?

Here are some quotes from Monday:

Both Clark and Stastny also credited the Avalanche’s system for much of the team’s success last night. Colorado generally placed a forward in the high slot in the offensive zone. Utilizing that system allows the Avs to have a third man back in the event of a turnover and also takes away the middle of the ice for their opponents, forcing them to go up the wall to start a breakout.

I've admitted before that I don't know squat about X's and O's, so I was interested to read this little nugget. More as a learning experience than anything else, I made a concerted effort to watch for this. My eyes failed me, however, because I never saw it.

"We have to keep the same game plan we used in Chicago," said Clark. "They have a lot of speed and we need to slow them down and not give them a transition game. The best way to do that is to get pucks deep and not create turnovers."

I never saw that one either. There actually was a great deal of pace in the game and the Avalanche are just not going to beat the Thrashers at that game; we all learned that a couple of weeks ago.

So what happens? What turns a capable team following a game plan one night to 5 guys skating around randomly the next? How do you follow up the defensive effort on Sunday with the Adventures In Puck Clearing fiasco last night? I just don't get it.

Yes, Kari Lehtonen was superb last night. He made some incredible saves and benefited from a couple of post-ringers to give him the shutout. But, seriously, a shutout? By one of the worst defensive teams in the leagues? Embarrassing.

And the defense? Oy, that was frightening. And frustrating. At times, the defense seemed to have Ilya Kovulchuk firmly in check. Other times, he was given all kinds of room to operate as he skated up the left wing. And those botched clearing attempts - our forwards get blame here too - were just mesmerizingly bad. It's too bad, because Peter Budaj seemed to be playing with confidence for the first time in weeks. If not for him, this would have been 5-0. 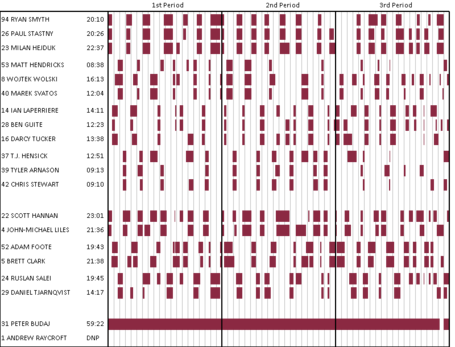 Welcome to the NHL, Matt Hendricks. Hendricks didn't appear to be incredibly comfortable out there, but he certainly didn't embarrass himself either.

I have to admit, I've been impressed with Darcy Tucker and Tyler Arnason of late, especially Tucker. Tucker finally seem to be earning all those late-game minutes he was given early on in the season.

The Avs host the Minnesota Wild on Thursday.

It was the eighth time this season Colorado was shut out. - AP [They've got to lead the league in that, right?]

Colorado continued its pattern of following up one of its rare strong showings — in this case, a 5-1 win at Chicago on Sunday that snapped a losing streak at six games — with a clinker. Maybe that's one of the issues the Avs were pondering when their dressing room door remained closed for a few minutes after they were shut out for the eighth time this season. - Terry Frei, Denver Post

Lake Erie Monsters coach Joe Sacco on Sunday summoned center Matt Hendricks into the coaches' office, where assistants Sylvain Lefebvre and David Oliver also were waiting. They went over a few mundane hockey items with their center, and then Sacco told Hendricks, oh, yeah, there was one more thing. - Denver Post