Share All sharing options for: Game 68 Recap: Avalanche 2, Wild 1 (SO) 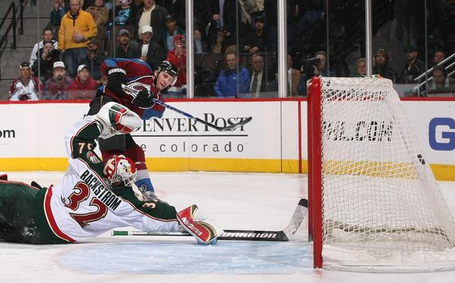 You know the old Peanut's strip where Lucy is offering psychiatric counseling for 5 cents? The Colorado Avalanche need to create a version of her "The Doctor Is In" sign: "The Defense Is In". After taking Tuesday off for golf, the defense was back in the office on Thursday. All them young, inexperienced defensemen really pulled it together, holding the Minnesota Wild to just 17 shots and 1 PP goal.

I've been working 2nd shift all season long, so I normally don't start watching Avalanche games until 11:30 or so. During most games - especially the lame efforts we've been seeing lately - I start nodding off at some point. Last night, I was wide awake for the entire exhilarating performance. Win or lose, if the Avalanche can put in more efforts like that, I'll be very happy.

The first period was the most even of the three regulation periods, with the Wild getting off to a 13-8 shot advantage. They also got on the board first, when a Marc-Andre Bergeron point shot fooled Peter Budaj at the 10:15 mark. The FSN crew didn't spend much time showing this replay, so I still don't know why Budaj missed this one - it seemed like it should have been a routine save. Perhaps it was tipped. At any rate, this was the only blemish on the night. Really, from this point on the rink had a decided tilt in favor of the Avs.

John-Michael Liles evened the score up just 37 seconds into the 2nd period, from almost the exact same spot as the MAB goal in the 1st. It also seemed like it should have been stopped, although this time the FSN guys made sure to show the deflection on the replay.

That was it for the scoring, but not the excitement. The Avs defense really started to take control in the 2nd period, even without (or, perhaps, because of the absence of) Adam Foote, who left the game midway through the 1st. At the 11:47 mark, Cody McCormick appeared to take a cheap shot at Cal Clutterbuck. I say "appeared to", because none of the cameras picked up the whole thing. From what I could see, Cody seemed to cross check Clutterbuck in the head. McCormick got a double minor for the penalty, and then Ryan Smyth was sent to the box as time was expiring. The Wild ended up with a long, 5-and-a-half-minute powerplay. They mustered one shot. Where oh where has this Avalanche team been all year? Towards the end of the period, John-Michael Liles went after Clutterbuck as well. This time, Clutterbuck evened things up by adding a great deal of dramatic flair to the play. The mikes on the ice picked up the refs berating Clutterbuck for the dive - hilarious!

In the 3rd period, it was time for Cody Mac to pay the piper and he answered the call in a big, big way. When the Kings' John Zeiler had to answer for his actions earlier this season, he had to do so against Ian Laperriere. Nothing against Lappy, but when McCormick had to answer, he had to do so against 6'8" John Scott. McCormick was giving up 5 inches and 30 lbs. Was it pretty? Not really. Was it ballsy? Hell yes. Even without considering that McCormick was questionable for the game after getting injured in one of his two fights on Sunday, he gets major props in my book.

Meanwhile, the Avalanche continued to hammer the Wild on the ice, peppering Backstrom with 14 shots in the 3rd period (Budaj faced two shots). Backstrom deserves major thanks from his teammates, because he's the only reason they escaped Denver with a point. During the broadcast, the cameras kept showing a girl in the stands behind Backstrom; it was great to see her get excited on every scoring chance, but it tugged at my heart strings to see her disappointed when Backstrom made save after save.

Thankfully, there was a happy ending for the girl, brought about by our good Prince, er Baron. Wolski's shootout attempt was, yet again, simply majestic. If it doesn't already exist, someone needs to make a youtube compilation of all of his shootout attempts. I am not a big fan of the shootout...but I could watch Wolski in the shootout any day of the week. 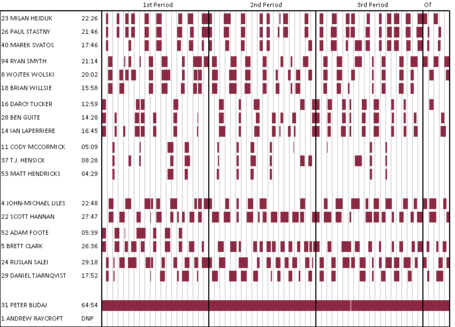 Chris Stewart and Tyler Arnason were the notable healthy scratches (Cody McLeod must not have been ready to go). I assume Stewart was a healthy scratch; honestly, I don't think it will hurt to have him watch a game from the press box. I still think he needs more ice time, not less. Ditto for TJ Hensick, who looked pretty good in his limited time on the ice.

The first line of Svatos, Stastny and Hejduk wasn't bad...but they seemed to get muscled around a little too much for my taste. What about putting Stewart on that line and dropping Svatos down to join Smyth and Wolski?

The Avalanche have a busy weekend ahead with games on Saturday and Sunday. As a programming note, my son's birthday is tomorrow and I will not be doing a recap of the Edmonton game (the game thread will be up as normal). If anyone wants to put down some thoughts after the game, the fanposts are a great way to do this. Really, you guys can do this for ANY game; if you feel like doing a recap of your own, make a fanpost.

Wolski continues to be a marvel in shootouts. He is 15-for-23 in his career. That 65.2 percent success rate is the highest in NHL history. - Adrian Dater, Denver Post

Cody McCormick = steel. As in balls. Steel balls. Because that's what you would need to take on Godzilla on skates. But that's exactly what McCormick did tonight as he lined up with John Scott just two minutes into the third period. - Shane Giroux, Avs Talk (welcome back, Shane!)

“I’m never one to really go looking for a fight,” said McCormick. “I’m there for the guys on the team or protect myself. That’s how I see it.” - Craig Stancher, ColoradoAvalanche.com

Colorado D Ruslan Salei's penalty for holding the stick midway through the first period was the 1,000th penalty minute of his career. - AP

By standing loyally behind overhyped, underperforming young NHL players on a disappointing team, Granato has presided over the worst season since the Avalanche moved to Colorado in 1995. - Mark Kiszla, Denver Post [warning: this article may make you throw things at your monitor]

The Wild were terrible offensively, and Backstrom was lights-out. This was a horrible showing by the Wild forwards, and proved that they are a mediocre team. Hopefully Gaborik can come back soon, and spark this team to get them into the playoffs. - Nathan Eide, Hockey Wilderness

"I know there was a lot of snow in our end," Lemaire said. "It was a miracle after the third to be tied with them. ... We had more than a handful of guys that didn't play their game. So this is why we can't win, and it's been like this all year. - Michael Russo, Minnesota Star-Tribune

This is a heartless, immature, unprofessional and rudderless team right now. - Hitting the Post (amazingly, the team in that sentence is Minnesota, not Colorado)

It was a grim scene otherwise around Kroenke Sports headquarters. A bunch of people were let go Wednesday by KSE, despite the fact Enos Stanley Kroenke is a billionaire. KSE employees still on Stan’s payroll have had their matching 401K company contributions eliminated, and a hiring freeze is in place throughout the company - Adrian Dater, All Things Avs