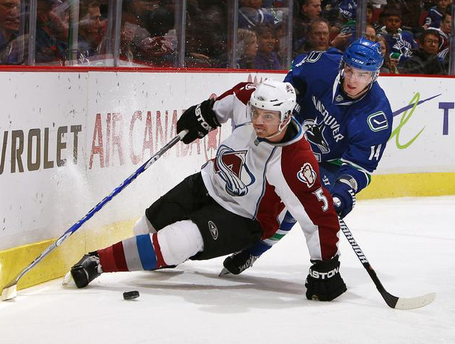 Brett Clark, keeping his eyes glued to the puck

The Avalanche had 7 powerplay opportunities in the game, spending more than 1/6 of the game with the man advantage. The 10:37 spent on the powerplay netted a whopping 5 shots (and, yes, one goal which I believe was the first PP shot the Avalanche mustered). It also netted three shorthanded shots for Vancouver and a goal. How bad is it? When Alex Edler had that horrific boarding penalty, I was actually relieved that he didn't get the major penalty that he deserved; as it was, Burrows scored his shorty on the ensuing PP. 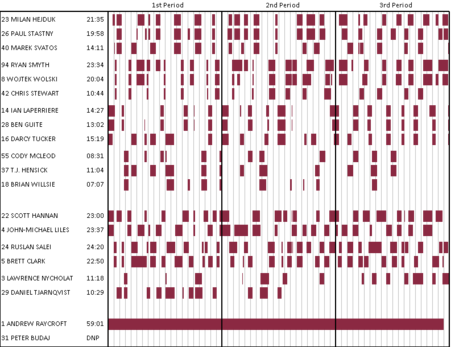 This marked the 3rd straight game with the Hejduk-Stastny-Svatos line. By the end of the game, Stewart and Svatos had switched. I was sound asleep by then, but this makes much more sense to me.

Someone ignored Mr Whipple's request, and Tjarmin was knocked out of the game midway through the second when a puck managed to cut him through his visor. That meant more ice time for Lawrence Nycholat. Again, I missed most of the 2nd half, so I don't know how he played. He had a rough start in Edmonton.

The Avalanche close out this 3-game NW road-trip with a visit to Minnesota on Tuesday, the final game against the Wild this year.

The Avalanche was like the player who made good use of his resources as the game went along, but Colorado ultimately was doomed by too many bad early moves in its 4-2 loss to the Vancouver Canucks on Sunday night. - Adrian Dater, Denver Post

Late in the third period of Sunday’s 4-2 win against the Colorado Avalanche, the in-house broadcast crew pictured a pretty woman holding a sign asking Burrows to marry her. Then the dude next to her took the sign and held it above his head, proof we live in interesting times. - Iain MacIntyre, Vancouver Sun

The Canucks, celebrating their 250th straight sellout crowd, lost nine straight home games from Dec. 30 - Jan. 31, but haven't lost at GM Place since. They are 14-3-1 overall since snapping that skid, moving up to fifth place in the tight Western Conference, and now trail slumping Chicago by two points in the race for home-ice advantage in the first round of the playoffs. AP