Share All sharing options for: Game 71 Recap: Wild 3, Avalanche 2 (SO)

Oh noes...the streak is over 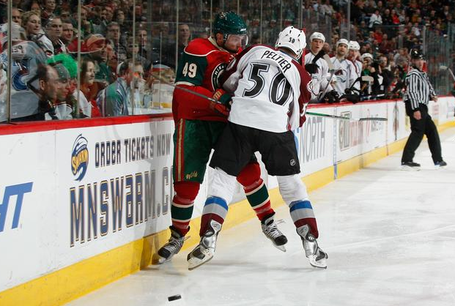 I've rambled before about perspective, and I'm going to do it again here. If that had been a playoff game, or even a game with playoff implications for both teams, it would have been a devastating loss for the Avalanche. To blow a one-goal lead (twice) and lose in a shootout to a division rival shouldn't be something I'm okay with, but I am. With the Avalanche out of the playoff picture, I am not rooting for the Avs to lose to improve our draft position this summer. However, with the season all but over, wins are less important to me than performance on the ice.

I was pleased with that performance.

With three defensive starters out, the Avalanche were forced to go with three newcomers on the blueline - Lawrence Nycholat, Michael Vernace and Derek Peltier. Nycholat was playing in his 3rd game as an Avalanche, and the latter two were both making their NHL debuts. It could have been a disaster, but all three played solid games. Nycholat played over 18 minutes and looked much more comfortable than he did this weekend. Vernace and Peltier were paired together and that seems to have been a smart move; the apparent familiarity with each other's game helped them on the ice (the only real noticeable glitch being a miscommunication on a play with Peter Budaj). All three were on the ice at points late in the game and in overtime, and I wasn't at all nervous when I saw them.

This would be a perfect place to segue into a paragraph where I chide Scott Hannan for screening Budaj and possibly even defelecting Nick Schultz' game-tying shot. I could say something witty like "too bad Hannan and Clark can't play like the new kids" or something. But, really, the Wild made a series of excellent plays to set up that goal, both to keep the puck into the zone and to set up that beautiful, weird-angle shot from Schultz. Hannan played over 31 minutes in the game, and was the defensive anchor all night long. I'm just not able to muster any criticism of him for that one play.

If ever there was a streak that was not a true representation of the play on the ice, it would be the Avalanches perfect 19-0 record this year (and however many games going back to last season) when leading after 3 periods. It's 19-0-1 now. It's a fluke that I can't really explain, as the Avalanche aren't exactly the prototypical shutdown defensive team. In fact, what is the opposite of prototypical shutdown defensive team? Because that's usually how I'd describe them. Ironically, the Avalanche did a good job with the 3rd period lead last night - one of their better efforts of the season. The Wild were desperate and relentless, but the Avs ragtag defensive squad mostly kept things in check, and Peter Budaj was, once again, excellent behind them. Of course, that would be the game for the streak to end - on St Patrick's Day, Murphy's Law was in full effect. 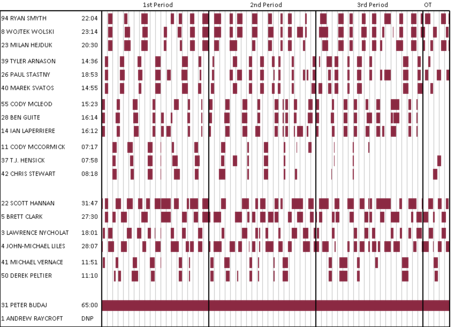 Tony Granato just can't make me happy. This weekend, he finally hit on a line combo that I liked (Smyth, Wolski, Hejduk / Stewart, Stastny, Svatos)...and then he goes and replaces Chris Stewart on Stastny's wing with...TYLER ARNASON. What?

The Avalanche close out their season series against the Oilers on Thursday at the Pepsi Center. After Thursday, the only divisional opponent we still have on the docket this year is Vancouver.

Tjarnqvist was having headaches after suffering facial cuts at Vancouver on Sunday, and Salei had a foot injury. With Adam Foote also out for the third consecutive game with a head injury, and with recently acquired Lawrence Nycholat playing only his third game for Colorado, it all meant that the Avalanche defense was a patchwork unit against the Wild. - Adrian Dater, Denver Post

The two teams traded chances throughout most of the 3rd period, and after a late bad power play, all looked lost for the Wild until Dan Fritsche saved the puck from sneaking over the blue line, fed it to Eric Belanger on a nifty give and go before Fritsche passed it to a streaking Nick Schultz. Schultz drove to the net and buried a great shot over Budaj's shoulder, tying the game with 1:46 remaining. - Nathan Eide, Hockey Wilderness

Moments after [Linesemen] Galloway and Mach signaled that Wild center Eric Belanger twice kept a frantic Wild possession onside by tip-toeing the blue line without a centimeter to spare, Nick Schultz of all players scored the biggest goal of the Wild's season to hoist Minnesota to a thrilling come-from-behind 3-2 shootout victory over the Colorado Avalanche. - Michael Russo, Star Tribune

And of course, the Wild had another one of those mid-game depressions when they got outshot 15-1 during about an 18-minute stretch. - Mike Russo, Russo's Rants

Zidlicky, although his play was not what one would call overly stellar, did not get his team beat. The same cannot be said of Bergeron, whose inattentiveness and lazy play combined with bad puck luck and, possibly, the worst stickhandling he's done this season nearly cost the Wild the game in both regulation and in the OT session. - WRT, Hitting the Post

Should the Avs tank it so they can get the first pick in June's NHL draft? Yes, yes, a thousand times yes - Adrian Dater, Denver Post