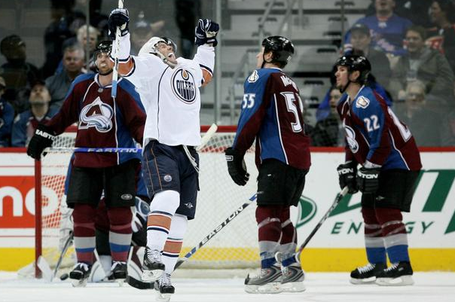 We've seen some bad games from this team this year, but this one takes the cake. This wasn't a game where too many lucky bounces went the wrong way, or a closer game that just got away from the team. This game was nasty from the opening faceoff, and I don't mean "Miss Jackson" nasty. This was a disgusting hockey game.

I'm not always completely in tune with this kind of thing, but I knew this game was going to be bad just 8 minutes in. The game was tied 1-1, but on the ice the Avalanche were killing a penalty by coasting around on their skates. No one was skating, no feet were moving. I told myself then that we were going to be in trouble. We were.

The only good thing about the game was that the meltdown happened early enough for me to fast forward through large chunks of this clunker. What I did see was enough - our veteran defensemen watching timidly as the Edmonton forwards moved behind them to plant themselves in the crease, our goalie looking listless as he drains every ounce of confidence he's gained in the last two weeks (and then some), our forwards drifting aimlessly into the offensive zone on the forecheck and lazily swinging a stick towards a puck carrier. It was just bad, bad, bad, bad. How bad? It was worse than the new Facebook layout bad. It was Jar Jar Binks bad. It was Ishtar-Gigili-and-Howard-The-Duck-rolled-into-one bad. As Huey Lewis once sang: "sometimes, bad is bad." This was worse.

And it wasn't because of the kids - the two TJs, for example, were the only two forwards with any sort of hustle.

I won’t mention any names, but I saw a couple of Avs players after this one standing in the halls, laughing and telling jokes with friends. Meanwhile, I saw Ben Guite still sitting in his uniform well after the game, staring off into the room. The picture I get with this team finally - the one of 2008-09 - is that some guys cared and some didn’t. Make no mistake, the guys who didn’t care will be gone soon.

That's from Adrian Dater, and that first sentence is rather discouraging. I thought about dropping AD a line when I read that to see if he'd share the dirt with me on the down low, but I decided against it. If I did know the culprits, those players would be dead to me for the rest of their tenure with the Avs.

To me, the most amazing thing about last night was not how bad it was, but how unexpected it was. Yes, the Avalanche are at the bottom of the standings. But the team has (er, had) been playing well of late and had been competing on most nights. For them to not show up like this - and on a teamwide level - is the real shocker. I don't know about you guys, but I feel like I was on the receiving end of a shocker last night. And no, I'm not going to explain that - you'll either get that or you won't. Either way, I'd rather not experience that again. Ever.