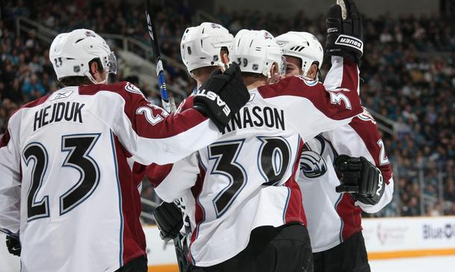 The Minister of Defense contributed, but it wasn't enough

It's such a foreign experience, following an Avalanche team out of playoff contention (not officially, though - the Avs are still at least a few games away from being mathematically eliminated). It's taken a little bit of soul searching to generate my official position on the Ti4T subject. The bottom line is that I think I'm in the same boat with most Avalanche fans. I am not rooting for the Avs to lose, but I'm not going to be upset if they do...under one condition: they have to compete. Crap like the Edmonton debacle is unacceptable.

Losses like last night, where the team played good enough to win but couldn't pull it off (something we've seen all year long), I can totally live with.The Avs played the Sharks well; there's no morning after embarrassment after this one, even though there are certainly areas that need work. Like, all of them.

One thing that bugs me about non-Altitude feeds (besides the Minister of Defense and TJ Max crap) is that the out-of-town guys ALWAYS say the reason for the disappointing season is the goaltending. The only exception I can think of to the previous sentence is Marc Crawford, who said our defensemen too often look like they are in a fire drill. He's 100% correct, and shouldn't be the only one able to see that. And as far as I can recall, no one has really singled out the offense as a contributor to our downfall. In fact, recently I heard someone (can't remember who) saying that our offense was definitely not the problem. Last night was the 11th time in 12 games that we've scored 2 goals or less in regulation. Yes, folks, the goaltending has been terrible. But so has the play of our defensemen and our offense (don't even get me started on special teams *cough* 5 minute powerplay). Blaming the goaltending is a simple cop out - our problems are much, much deeper.

Besides changing (slightly) how I root for the team, I'm also watching the games a little differently. For the final 10 games, I'm focusing each night on one position to give me some additional fodder for the final grades this summer. Last night, I was studying the centers - Wolski, Hensick, Galiardi and Guite. I have to say, I was rather surprised by Hensick's effort - or lack thereof - in the game. When he had the puck, it wasn't so bad. When he didn't...he was in full coast mode, and he missed a lot of offensive opportunites because of it. And he was 100% nonexistant defensively, completely stopping on any play in which the puck carrier was between him and the net. Since I was keying in anyway, I saw Michalek's game winning goal late in the 2nd quite a bit differently than I normally would. That play started behind the San Jose net. Hensick and Michalek were racing to the puck in the corner. Hensick made a pretty good play to knock Michalek into the boards, but Michalek still ended up with the puck and off he went in the other direction. Now, Hensick went into the boards and by the time he got his legs back he was a step or so behind Michalek. Instead of skating hard to get back into the play, Hensick lazily strolled down the ice. By the time Michalek was getting the puck back in front of the Colorado net, Hensick was just inside the blueline, coasting. I am sure that Michalek is faster than Hensick by a far bit, but there is no reason for Hensick to be 65 feet behind a player who left the boards on the other side of the rink just moments before you did. Well, there is one reason: lack of effort. And that is discouraging. 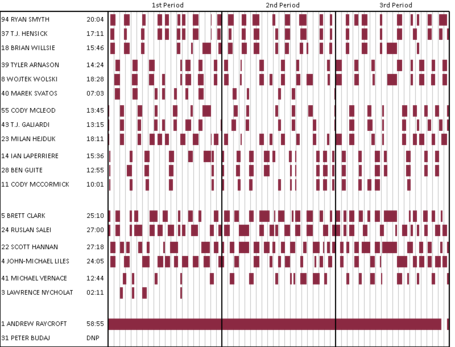 Lawrence Nycholat was injured just a few shifts into the game after Jonathan Cheechoo boarded him. Cheechoo was ejected from the game. Nycholat looked to have injured his arm on the play and I have a sneaking feeling that we won't see him again this year. With Ruslan Salei back in the lineup, Michael Vernace got the call over Derek Peltier for the final slot. He's playing rather well, and Drew Remenda singled him out a couple of times for his smart play in his own end.

Marek Svatos did not play in the 3rd period at all. According to Dater, it's a head injury. That's...what...4 head injuries in a couple of weeks, isn't it?

It's nice to finally see Tony Granato giving some of the youngsters a chance. Hensick played with Ryan Smyth and Brian Willsie (yes, I dissed Hensick above, but we need to see him play to be able to evaluate him). Galiardi spent much of the game with Milan Hejduk; he's playing awfully small on the ice, but he's shown some good flashes when he gets space.

The Avalanche host the Ducks on Wednesday.

Cheechoo drove Nycholat headfirst into the boards in a corner near the Colorado net. Although Nycholat appeared to dip his shoulder right before Cheechoo arrived, possibly compounding the hit's severity, Nycholat was down on the ice for several moments before skating to the dressing room under his own power. - AP

"I thought it was an outstanding hockey game. Obviously, they were able to make the most of one more chance than we were," Avs coach Tony Granato said. "I thought, from start to finish, we played pretty solid." - Adrian Dater, Denver Post

The only reason for [Sakic] to try to play again this season, even if it's only the back-to-back home games against St. Louis and Vancouver in the final weekend, on April 11 and 12, is to wave goodbye. - Terry Frei, Denver Post

Had my first face-to-face “meeting” with a blogger tonight. Because he wants to remain anonymous, he will be referred to now and from this point forward as his actual anonymous blogger name, Jibblescribbits. - Adrian Dater, All Things Avs [I talked with AD yesterday, and I tried to get him to tell Jibs that he was only meeting him because he thought he was Doug Knight of the San Jose Mercury News]

Rick Sadowski is back folks. After the unfortunate demise of the Rocky Mountain News, Sadowski is now an NHL.com correspondent. I'm not sure if it's a full-time gig or just freelance but it's good to see Rick continuing his hockey writing. - Shane Giroux, Avs Talk

I have watched a lot of NHL hockey and I don't think my game really resembles anyone. I have a lot of similarities with a guy like Robyn Regher who can make a good first pass, helps out a powerplay from time to time and is sounds defensively but we also have our differences. - Cameron Gaunce, School Your Pool