Share All sharing options for: The Minister Of Defense Was An Enigma In San Jose Too [Updated] 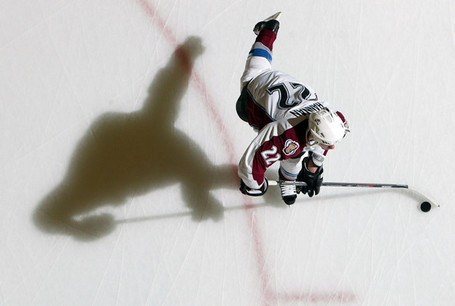 A year or two ago, there were a great deal of debate over the play of Brett Clark. Some loved him, others loathed him. With Brett Clark's game devolving before our eys, Scott Hannan seems to be emerging as one of the biggest enigmas on the Colorado Avalanche.

Personally, I think Scott Hannan has been pretty good, even to the point where I'd call him one of the few bright spots on our defense. But others out there seem to despise him. I thought this might be an Avalanche-specific phenomenon, partly related to his hefty salary.

Turns out, Sharks fans are just as conflicted:

I've heard some dissenting views on Scott Hannan. Although some think he was overrated, I tend to disagree. Hannan was one of the better defenders the Sharks have ever had. I can't speak to his issues as a member of the Avalanche, but his time with the Sharks was nothing short of impressive. To me, he'll always be the Hannan who shut down the Av's in the 2003-2004 post season. He's fallen off a bit, and he's had his struggles in Colorado. But he's still a classy guy and a welcome addition to this team.

Oh, and it doesn't sound like San Jose fans know anything about this Minister of Defense garbage either.

Okay, this Minister of Defense thing is just getting weird.

Once dubbed "The Minister of Defense" (by some lame something or other), Hannan returns to his draft city sporting a team low -14.

So, that leads me to believe that someone was using that nickname when The Hobbit was with the Sharks.

But then, from this January:

First, former Sharks defenceman Scott Hannan (sorry, Colorado fans: he is no Minister of Defense--that title belongs to the late Reggie White ONLY!) took a penalty for high-sticking.

Sorry? We didn't give him that silly nickname. You guys did. Right?

October, 2007 (the beginning of Hannan's first season in Denver):

On the cab ride from the airport I heard a radio ad for the Avalanche with a reference to Colorado’s “new minister of defense — Scott Hannan!!”  He also showed up on a local magazine cover, along with two other Avs newcomers.  Now he never got THAT kind of treatment in San Jose, eh?

So, was this an abominable creation of the Avalanche marketing team? This would make sense to anyone who's seen our jerseys. Or did we inherit this from San Jose? I am totally...Lost.