I don't think that's how this duck hunt game is supposed to work, fellas 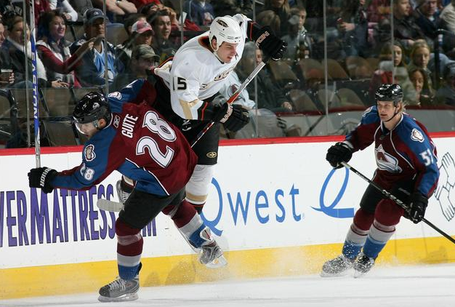 Hey, look! It's two players who actually care about the team IN THE SAME PICTURE! Oh, and both are UFAs this summer.

Hopefully, we'll learn from this one. We didn't skate. We didn't play physical. We didn't do any of the things that make us successful. All in all it's just an embarrassing effort. - Ben Guite, after Thursday's game.

I hate to break this to you, Ben, but I don't think many of your teammates learned much from that Edmonton game. If anything, the Avs were even worse in this game, even though the score was slightly more favorable (good lord, I can't believe I just typed that). As you said, there are some serious flaws in the team's game and I'd venture that losing consecutive home games by a 15-3 margin would back that up.

I'm not sure what else there is to say about the game. The Avalanche stunk up the joint - again. At least this time they were able to get Andrew Raycroft in on the "action" - his 4 saves on 8 shots fit right in with the team's game plan.

The one bright spot (besides the I-actually-give-a-shit play of Matt Hendricks) was the admission - FINALLY - by Stan Kroenke that the Avs might have some rebuilding to do. Ya think? Seriously, as bad as they've looked, I still believe this team is a poor representation of what they are actually capable of and don't need a major overhaul. But there are definitely some changes to be made, and not just behind the bench.

In that same article, Dater mentions that the Avalanche have been officially eliminated from the playoffs. I don't believe we're quite there yet. Colorado can get to 80 points and 39 wins (as if ANYONE thinks that would happen). Either Edmonton or Anaheim will be over 80, as they play each other again this year (twice, actually). So, one of those teams has to go winless the rest of the way, and all the other teams would have to be under 81 points. For example, the Avs would get in if

So, if I've done that right (and if you know me, you know that's just a 50/50 chance), it's not quite official, but the doctors can call it at any time. 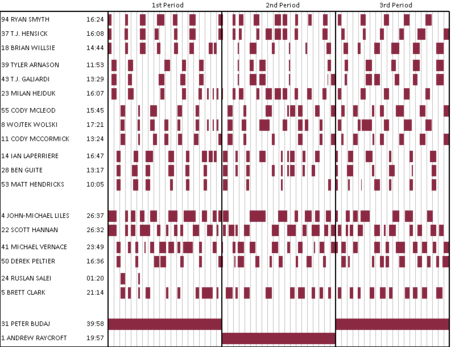 They were...interesting. Tough to really complain about the lines with so many players out of the lineup. Tony Granato followed up his criticism of Wojtek Wolski by moving him to (wait for it) the 3rd line. (To start, at least - combos went crazy after the first period).

Ruslan Salei became the latest injury casualty when he fell awkwardly after an accidental collision with Bobby Ryan. You know the season is bad when you're wondering how close Daniel Tjarnqvist or Lawrence Nycholat is to coming back.

Does it matter? I think it's Friday, or something. And I'm sure Kyle Keefe will be the first to tell you it's a team playing hard for a playoff spot.

Avalanche president Pierre Lacroix watched much of the game in the owner's suite and did not look like a happy man much of the time. The Avs had no comment on personnel matters, but it is expected that Lacroix will make the call on whether Giguere retains his job. - Adrian Dater, Denver Post

Mike Haynes: This team is getting beaten like a rented mule!
Peter McNab: My goodness, Mike! I'm surprised they're even standing after that thrashing. It's unbelievable the heart this team has against this evil Ducks squad.
Mike Haynes: To pull out a win here, it's going to take a miracle!
Peter McNab: There's only one man who can give them that, Mike... - Shane Giroux, Avs Talk