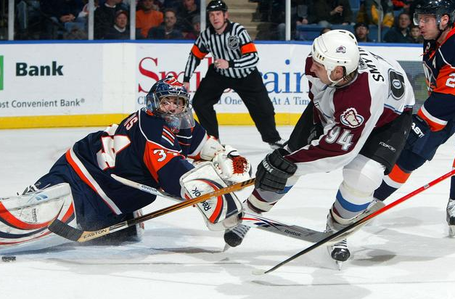 Will he still be wearing this uniform tomorrow?

278 minutes and 41 seconds. That's how long it's been since the Avalanche have had a lead in a game.

190 minutes and 31 seconds. That's how long it's been since any Avalanche player not named Ryan Smyth has scored a goal.

5 minutes and 51 seconds. That's how much NHL experience Jesse Joensuu had under his belt before scoring his first NHL game.

40 days. That's how much longer we have to endure this. As someone pointed out in the game thread last night, it's not just that the Avs are losing and are doing so seemingly without any care as to whether the opposing team is any good or not. The problem is that these games are dreadful to watch.

Just over 24 hours. That, of course, is the time until the trade deadline tomorrow. I really hope that Ryan Smyth isn't going anywhere. But if he is going, he's raised his trade value substantially this week. I'm on record as saying that the Avalanche really do not need to blow it all up, and I'm standing by that, even after this astonishingly bad road trip (honestly, "astonishlingly bad" doesn't even come close). But I don't have any idea what Francois Giguere has up his sleeve and I'm kind of excited to see how it all plays out. Personally, if the Avs move a few assets for picks, I'll be happy. If Tucker goes too, I'll be quite pleased (at this point, it doesn't really matter if Arnason sticks around). Anything after that, in my book, would be gravy. 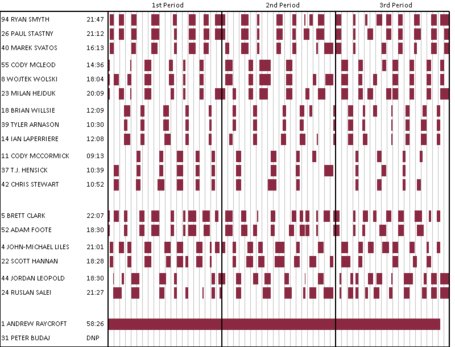 Darcy Tucker was a surprise healthy scratch last night. Could a deal be in the works? Please?

Maybe I'm just seeing Chris Stewart wrong, because I simply do not understand why he is not getting more minutes than he is.

And gee whiz, it's a good thing TJ Hensick had that conditioning assignment this weekend. Otherwise, those 3 3rd period shifts would have been exhausting. Tony, it's over. Play the kids.

The Avs host the Red Wings on Wednesday. Anyone still feeling cocky about this one?