Share All sharing options for: Top Avs Of All Time: #6 Rob Blake 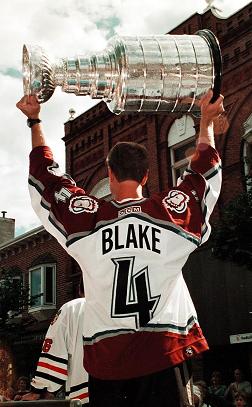 Rob Blake only spent four full seasons with the Colorado Avalanche, but years in Denver were some of his best.  His late but invaluable contributions to the glorious Cup run of 2000-01, in addition to all of his other fine defensive qualities, land him high on the list of Top 19 Avalanche Players of All Time.

Rob Blake is part of a dying breed.  Many defensemen these days seem to have just one good quality.  Whether it's speed, or a big point shot, or a crushing hip check, most defensemen specialize in just one aspect of their game, and their teammates must compensate for their weaknesses.  Rob Blake is one of those rare, multi-talented blueliners that not only dominates in sheer size and hitting ability, but can put a big blast on net and still keep up with the quick-footed youngsters so many years his junior.

Considering his eventual development into a top-tier NHL defenseman, it's a bit surprising that Blake wasn't drafted until the 4th round (70th overall) of the 1988 NHL Entry Draft by the Kings.  Even though that class included guys like Mike Modano, Jeremy Roenick, Rod Brind'Amour and Teemu Selanne, it's tough to believe that Blake was chosen after such NHL no-shows as Kevin Cheveldayoff and Murray Duvall.  Those guys would never play a game in the big league.  Blake will finish his career with more than 1200, not to mention at least one Stanley Cup ring.

Blake would spend the next decade in Los Angeles, establishing himself as a defensive force to be reckoned with.  A big man, towering 6-4 and carrying a girthy 225 pounds on his frame, Blake developed a crushing hip check that is still feared to this day.  While some of the credit must go to his pear-shaped body and exceptionally wide hips, Blake can skate backwards into the boards with the best of them.  It's not easy to line up a fast-moving target with your ass alone, but Blake can do it better than most.  He's so good at it that headlines about his contract and salary changes still start with references to his powerful posterior.

Rob Blake is a big, physical defenseman, no doubt, but that isn't his only talent.  He's also a consistent points-producer and has a booming (if slightly inaccurate) slap shot.  In Los Angeles, Blake neared or topped 50 points six times, including an exceptional 68-point showing in 1993-94.  He also managed 137 penalty minutes that year.  He won the Norris Trophy in 1997-98.

By 2000-01, after years of putting in hard work for a Kings team the only ever looked like a contender for the Cup once, Blake decided to test out the free agent market.  But before he could do that, the Kings decided to get something in return for their prized blueline monster.  In exchange for Adam Deadmarsh and Aaron Miller (and some other guys), the Kings traded Blake to the "Win One For Ray" Colorado Avalanche.  The Avs were dead-set on winning the team's second Stanley Cup for the previous year's prized trade deadline acquisition: Ray Bourque.

The combination of Blake and Bourque was a winning one immediately.  In the final 13 games of the season, with Blake and his giant ass firmly planted in the top defensive pairing with the famous ex-Bruin, the Avs went 8-3-1.  Blake scored 10 points in that span and played an average of 26 minutes per game.

In the playoffs, he got even better.  In 23 games, he scored six goals and thirteen assists for 19 total points, along with 16 penalty minutes and 83 booming shots on goal.  He and his new teammate Bourque anchored the Avalanche throughout the run to the Cup, and Blake watched with the rest of them when "Raymond Bourque!!" lifted the hardware triumphantly above his head for the first time in a two decade career.

Bourque would retire, but Blake would play on with the Avs.  In the subsequent four full years he played in Colorado, Blake never scored less than 45 points.  He also decreased his penalty liability while keeping up the carnage caused by his monstrous hip checks.  Patrick Roy had a relatively easy time finishing out his stellar career because of Blake's presence in front of him.  And the Avalanche special teams enjoyed continued success because of Blake's presence on both the power play unit and the penalty kill.  And who among Avs fans will ever forget watching Blake wind up that crazy slap shot while thinking, "I hope the fans behind the goal have insurance."  That slapper rarely ever went in, but man did it cause chaos around the net, often to the Avs' advantage.

Unfortunately, due to the salary cap and his big price tag, Blake left the Avalanche at the end of the 2005-06 season, returning to his old home in Los Angeles.  And then, after two sub-par years with the Kings, Blake found a new home in the 2008-09 season with the powerful San Jose Sharks.  At 39 years-old, Blake is still playing more than 20 minutes a night while scoring more than 40 points and laying down more than 60 hits.  Not bad for an old man with a big ass.

Rob Blake's big, stifling presence behind the blue line, his booming if off-target slap shots, his goofy smile and hardcore dedication to winning will always be fondly remembered by Avalanche fans.  Most fondly remembered, at least by me, will be his Butt of Brutality, the main reason he finds himself now and forever among the Top 19 Avalanche Players of All Time.