The Avalanche pull out of another one 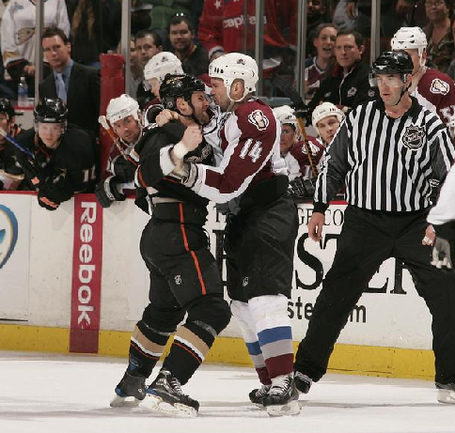 Who is that on the Avs bench not watching the fight? Hensick?

Did you know that Victor Hedman is from Örnsköldsvik - that same smallish town in Sweden where Forsberg, Naslund and the Sedins are from? I had no idea. And did you know there are currently just 11 NHL defensemen listed as taller than Hedman's 6'5" frame? Oh, sorry. Don't mind me - I've just been doing a little daydreaming...

What can you do? We'd like to see the Avs play well, but we don't want them to win. It's that simple. The Avs played "okay" last night - until the 3rd period. Good job, guys. This team is clearly just going through the motions right now, and I can't really say that I can blame them. I CAN blame them for getting into this spot to begin with, but not that we're here, I don't expect a team with nothing to play for to start playing.

Because so many players have started mailing it in, and with so much inexperience on the roster (uh, nice pass, TJ!) it's almost impossible to really evaluate individuals. Brett Clark is playing the worst hockey of his Avalanche career (by a country mile), but, really, so are a lot of the guys joining him on the bench.

As for the newest influx of youngsters, I've been impressed by Galiardi and Michael Vernace. Galiardi reminds me a lot of Svatos in ways (and sometimes I get the two confused) - he's trying to do too much by himself, but he's trying at least and can be dangerous with space. He also has Svatos' yipper dog mentality, as he kept running at George Parros all night (with a hilarious moveable-object-meets-immovable-object-event towards the end of the game). I don't think he has Svatos' shot (or, McNab voice, that goal-scorer mentality) but he's at least entertaining to watch. Vernace has been surprisingly steady in his own end. Already he seems to be one of the best on the team at clearing the puck (I know, that's not saying much). He's getting some hits in (hello, Niedermayer) and even starting to block the occasional shot. I'm enjoying watching these two youngsters at least. I wouldn't mind seeing Tyler Weiman as well (hint hint). 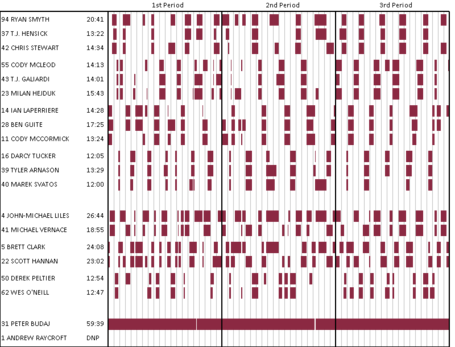 I can't seem to pull them up this morning (that's what she said). It's a shame, because Bobby Ryan had a couple of beautiful shots.

Fittingly, the Avalanche go for 8-straight (losses, that is) on April Fools Day.

Perry had intercepted T.J. Galiardi's pass near the Colorado blue line and, all alone, took a slap shot from the right circle that sailed over Budaj's shoulder and into the net just inside the left post. The goal was Perry's 28th. - AP

There is not a single part of the Avalanche's team game going well right now. The Avs have scored two goals or fewer in seven straight, and allowed four or more goals in five of those seven. They've allowed a power-play goal in four straight contests, and have only one multi-power-play goal showing of their own in the last 29 games. - Adrian Dater, Denver Post

Those Avs fans hoping to see Tyler Weiman or Jason Bacashihua recalled from Lake Erie to play some of Colorado's final six games will be disappointed, as coach Tony Granato said the team will stay with Peter Budaj and Andrew Raycroft the rest of the way. - Adrian Dater, Denver Post