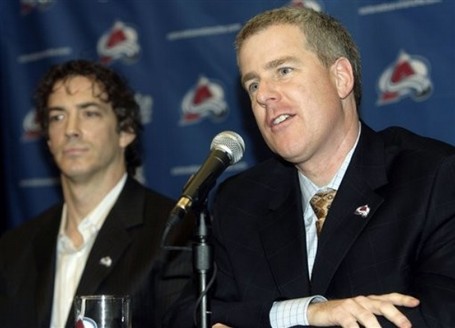 Deadline day is here.What will GM Francois GM be doing? Will this be a relatively minor sell-off (Leopold, Salei, Tucker) or will this be a full-scale demolition (Smyth, Hejduk, Laperriere). I'm still leaning towards the former, especially as it sounds like GMs are going to be a little less reluctant than normal to A) add a lot of salary and B) part with top prospects / picks. The economy strikes again.

It's an odd experience to be a fan of a team out of the running at the deadline. Normally, we're used to seeing the Avalanche stock up at the deadline - Blake, Bourque, Fleury, Kasparaitus, Theodore. This year, instead of wondering which new player we'll be welcoming to the fold, we're wondering which player(s) we'll be bidding farewell too.

I expect to be around all day and any Avalanche trades will get their own posts as soon as I can get them up. This open thread is for all your Avalanche trade chatter - rumors, breaking news and the what not. The SB Nation Trade Deadline hub is up and running as well. So, figure out a way to distract the boss and then sit back, grab your favorite beverage...and wait for the trades to start rolling in.