The dust has settled on an extraordinarily bland trade deadline, and the post-deadline Avalanche look a hell of a lot like the pre-deadline Avalanche. After all the talk of dramatic salary reductions, the only move we saw was Jordan Leopold going to the Flames for a 2nd round pick and a couple of AHL-caliber defensemen. Personally, I didn't think the Avs needed to be blown up, and I still feel that way. I would have liked to see Clark, Tucker, Raycroft and Arnason moved for...well, anything, but there just weren't any takers. Regardless, I am absolutely ecstatic that Ryan Smyth, Milan Hejduk and Ian Laperriere will still be wearing the god-awful Avalanche jerseys tonight.

If the Avalanche were to win all 18 remaining games, they would have 93 points - 1 more than the Dead Things have right now. How many Western teams have made the playoffs with 93 points or less since the lockout? One (Nashville, last year). So, despite what you hear from the Altidudes tonight, this season is over. Hey Tony, meet me at camera three.

Now is the time, Tony, to play the kids. Screw Tucker and Arnason. Let them simmer in the press box; they've earned it. This is the perfect opportunity to play Stewart and Hensick (and, for that matter, Svatos). Let's see what they can do. Are they top 6 forwards, depth players or trade fodder? Give them 15 minutes a night and match them up with some of our good players (Svatos had some good shifts with Smyth on Monday, did he not?). You know, we may lose some games, but it's not like what we're doing is working. Let's see these guys in action. If you do, I think we just might find that this team is better than we think...

I don't think I need to do a tale of the tape tonight. It doesn't take one of them Abel to Ysebaert geniuses to tell you that the Wings are a far better team this year. Still...I need to fill that space with something. I wonder what I can use *rummages around*...hmm, surely there must be a relevant item to place there. 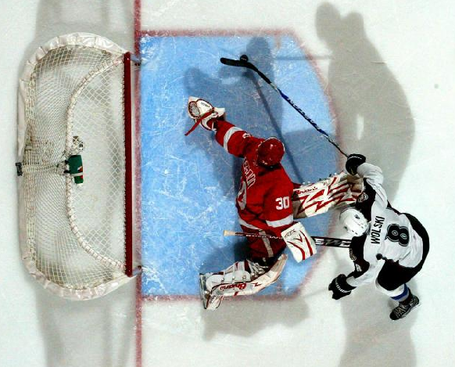