The Avs lose a game to clinch the season series 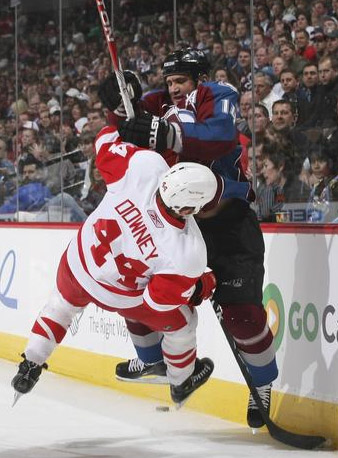 Thank goodness we don't have to see him do this for another team. Yet.

It's no secret that the Colorado Avalanche have been playing dreadful hockey lately. If there's been a worse stretch of play since the team arrived in Denver, I can't recall it (the Avs matched a Denver-worst 6-game losing streak in this game). Still, I think a lot of the recent bad stems from uncertainty over the trade deadline. Not that deadline stress was the only thing affecting this team (not by a long shot). But I do think that with the deadline behind us, the team will loosen up a little bit and play a little better the rest of the way.

In last night's game, it looked like the Avs were going to be dramatically better. The Avalanche came out playing hard in the first period. John-Michael Liles scored just 3 minutes in through a Ryan Smyth screen, marking the first time the Avs have had the lead in 6 games and the first time someone besides Smyth has scored in 5.

And the first period also saw the big hit by Ian Laperriere on Aaron Downey. It got the crowd fired up. It also impressed Detroit player / analyst Larry Murphy, who complimented Downey on his ability to take a check. Seriously.

But the fun wouldn't last. The Avs started to get sloppy in their own end, making turnovers and bad decisions like the not-so-loveable Avs of the recent road trip. Instead of taking a 1-0 lead into the dressing room at the first intermission, the Avalanche coasted around at the end of the period and watched the Red Wings move the puck around to clear a scoring lane for Valterri Filpulla.

While it took just one bad shift to erase the lead, it took a whole string of bad shifts in the 2nd to create a 2-goal lead for Detroit. Whether it was Andrew Raycroft handing the puck of to the wrong team, or Liles misplaying a hard around or - my personal favorite - Brett Clark hesitating to decide whether to take the puck or the body on a Detroit player entering the zone (he ultimately did neither), it was just sad to watch, especially from a D-squad making just shy of $19 million this year. Franzen scored. Draper scored. Really, Detroit could have had more, but seemed to be going a bit easy on the Avs. Milan Hejduk scored late in the 3rd, converting some good passes by Ryan Smyth and Paul Stastny but, of course, it wasn't enough.

In the end, the Avs played better - not that that's saying much. But there's still a lot to be desired. Colorado is still playing below their level of ability in just about every facet of the game. 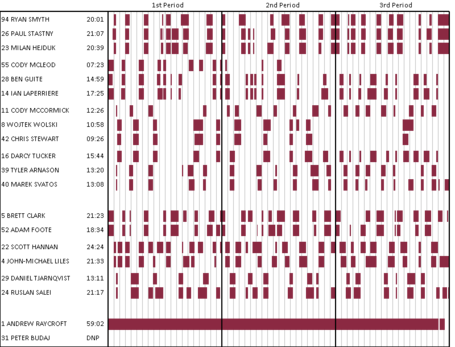 In last night's preview, I called on Tony Granato to give Chris Stewart, TJ Hensick and Marek Svatos more ice time. I'll just go out on a limb and assume that he doesn't have MHH in his RSS feed. Hensick was a scratch. Svatos played with Arnason and McCormick (a line that actually wasn't that bad). And Stewart? Well, he was paired with Wojtek Wolski...on the bench. Wolski and Stewart had 2 shifts in the 3rd period (Cody McLeod had none). That, um, isn't quite what I had in mind.

The Avalanche head out on the road again for a game in the Windy City on Sunday before returning to Denver to host the Thrashers on Tuesday.

The second period was of the tilted-ice variety. Play was in the Avs' end for most of the period, and Detroit was rewarded with goals from Johan Franzen and Kris Draper. Franzen's goal came after more sloppy play by the Avs in their own end, starting with Liles' failure to corral a puck whipping around the dasher, which allowed Franzen to grab it and start toward the net. He faked Avs defender Scott Hannan onto his backside before depositing the puck past committed Avs goalie Andrew Raycroft. - Adrian Dater, Denver Post

Colorado dropped its sixth straight game, matching the longest skid since the team relocated to Denver in 1995-96. The last time the Avalanche dropped six in a row was late in the 1998 season when they were on their way to wrapping up a division title. - AP

While the Avalanche couldn’t extend its winning streak over Detroit to four games, one trend from the season series between the clubs continued. In each contest, Colorado jumped out to an early lead in the first period - Craig Stancher, ColoradoAvalanche.com