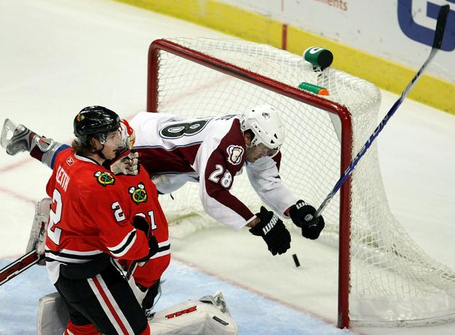 Psst! Hey, Duncan, the puck is a little more to the left!

- Staind, It's Been a While

And let's be honest - the Blackhawks didn't play very well at all. It could be the fact that they played yesterday in Boston. Whatever the reason, the team was more or less junk all night.

Still, even facing a second-rate effort in the second city, the Avalanche were impressive from front to back. The Avalanche haven't scored 5 goals in regulation since January 21st (a 6-5 loss to LA). And other than the Washington game, the only other time the Avs have held their opponent to a goal in 2009 was back on January 8th against this same Chicago team. 5 Colorado players scored a goal and 10 had at least a point (there would have been more if the Tucker / Clark goal had been allowed). Defensively, the team was solid, as was Peter Budaj.

To be honest, this is much closer to the Avalanche team I envisioned at the start of the year. I still believe the talent is there. It's a lack of consistency - whatever the cause - that has killed this team. 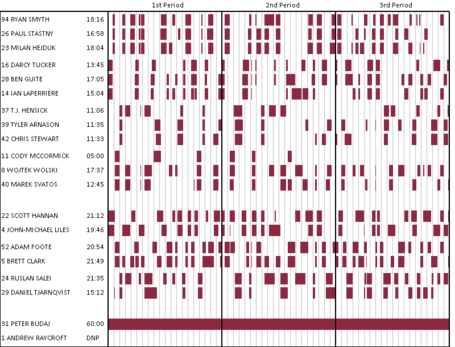 I'm not really sure I get what Tony Granato is doing with his forwards. I will say that Darcy Tucker had one of his best games as an Avalanche. And, of course, I can't forget to mention Tyler Arnason and his 3 points. Still, I want to see more of Hensick and Stewart.

The Avalanche host the Thrashers on Tuesday before a five-game spoiler stretch against NW teams.

[Colorado's] skid was their longest since dropping eight straight as the Quebec Nordiques in January 1992. - AP

"If we learn to play like that every night, with that discipline without the puck, we'll win a lot more games," Hannan said. "We can get exposed pretty quick if we don't play that way. - Adrian Dater, Denver Post

Campbell was boo'd before the puck was ever dropped as he was announced as part of the starting pair of blue liners for the Hawks.  Glad to see Q really made a statement with Campbell's piss-poor play yesterday by making him a starter for this game and giving him the 4th most time-on-ice.  As a fellow red-headed man, Campbell and I probably share ancestors some where back in history but you know what... It's open season on him... go nuts.  - Matthew, Second City Hockey

When it is obvious to even the most obtuse and positive-minded that the marching orders are for Altitude to play its listeners and viewers for fools with the "just-a-bit-outside" attitude, it's more than bothersome. - Terry Frei, Denver Post [If you haven't already read this article, it's well worth it]