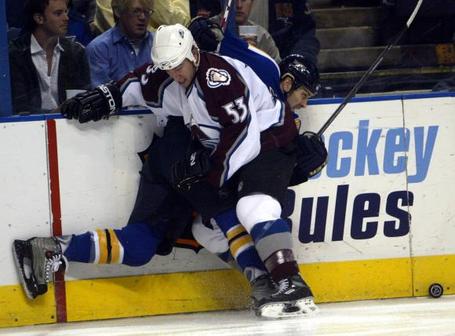 March 9, 2004 - Today marks the date of what has to rank as one of the worst trade days in Avalanche history. The previous summer, Pierre Lacroix had set up the Avalanche for one final Cup run, signing Teemu Selanne and Paul Kariya to one-year deals. Both players struggled, however, and the Avs were underperforming as a team (this would be the first time since moving to Denver that the team failed to win the division). Lacroix panicked, sending Derek Morris and Keith Ballard to Pheonix for Ossi Vaananen, Chris Gratton and a 2nd round pick and then shipped Tom Gilbert to the Oilers for Tommy Salo and a 6th round pick. The Avs still lost in the 2nd round of the playoffs. Salo and Gratton (and Tony Granato) were gone soon after. Vaananen, unfortunately, stuck around a while longer. Gilbert, Morris and Ballard, of course, would all look really, really good in an Avalanche uniform today.

Yes, the Avalanche would take Paul Stastny with Pheonix's second round pick and no, it doesn't make the trade better; they could have just as easily picked him 3 picks later when they drafted Tom Fritsche.