Share All sharing options for: Game 80 Recap: Stars 3, Avalanche 2 (SO)

Obviously, last night's game will be overshadowed a bit by the news that Joe Sakic will not play this weekend and glancing around at all the Sakic related stories in my RSS feeder would confirm that. But there was a game last night - and an entertaining one at that. So, for the moment, put down the hanky and read about the game. Save Dater's tear-jerker of a farewell for later...(like, you know, until after Joe actually hangs them up).

Once again, the Avs' "patchwork" defense looks quite a bit better than the "veteran" defense utilized for the first 2/3 of the season. None of the new players seem to be a great all-around player, but, they each bring a little something to the table. Vernace seems to be the Hannan-type, mostly steady in his end. Peltier is shaky defensively, but has some Lilesesque moves when he joins the play. MacKenzie isn't flashy, but seems to have a good shot and will lay the occasional hit (Finger?). I don't really have a handle on Macias yet. For whatever reason (and apathy from the opposing teams may certainly be one), this group has meshed to gether quite well. Reportedly, Adam Foote, Brett Clark and Daniel Tjarnqvist are all skating and may play this weekend, so be ready for a few steps backward.

The shot totals don't really bear this out, but I thought the Avs were the much better team for much of the game. They had a bunch of scoring chances. Since this is Colorado we're talking about, most of those chances fizzled out, of course, but the effort was there. The first period was scoreless. The 2nd period featured 3 penalties - all by Dallas. The Avs PP wasn't great (again), but did convert on one when Chris Stewart deflected a nifty Ray Macias shot past Matt Climie. That goal was Macias' first NHL point. Congratulations, Ray.

The 1-0 lead held up until 2nd intermission. You should know my favorite useless stat of the year - the Avs have yet to lose in regulation when leading after 2 even though they have been outscored 89-55. No team has scored less goals in he 3rd and only one team (the Islanders) has allowed more goals in the 3rd. Stupid, stupid stat.

Sure enough, Dallas scored. Twice. Fabian Brunnstrom seemed to spend an entire powerplay shift standing in the slot banging his stick on the ice. His hard work was rewarded when someone finally fed him a puck. Brunnstrom scored easily.

Later, the Stars took the lead when Mark Parrish broke in on the right and fed Steve Begin breaking to the net. Peter McNab (watching from the bench) took great pains to point out that the Stars scored despite the solid defensive effort from TJ Galiardi. That part is true. What I'd like to know (and what wasn't mentioned on air) is what the hell Scott Hannan was doing handing off Begin to Galiardi in the first place? Wouldn't that be his man? Is slowly drifting a new defensive technique the Avs are trying out?

By this point in the game, the Avs were losing the momentum battle - Dallas outshot Colorado 13-5 in the 3rd. But one of those 5 shots was a prayer that Johnny Hotcakes threw on net from the corner, and it bounced in off of Climie's left pad. The Avs have been beaten by a lot of questionable goalies this year, but that was one that most goalies would have stopped.

With the game tied after regulations, the teams skated through an exciting OT with lots of action. After that failed to resolve anything, we moved to the shootout. Wojtek Wolski made his patented Forsberg Stamp Backhand move to give the Avs the lead. Brunnstrom responded with a wicked backhand to even things up. Milan Hejduk moved the Avs in front again with a backhander of his own and then James Neal knotted things up again with a funky shot that Budaj seemed to stop, but it ended up bouncing over the line just the same. And then it was TJ Hensick's turn to shine. He grabbed the puck at center ice, broke in on net and <insert sound of a needle scratching across a record> crashed right into Climie. That bizarre unsuccesful attempt set the stage for Mark ibeiro. The Stars bench were all talking to Ribeiro before he took his turn. Peter McNab thought they were tipping him off on something they saw in Peter Budaj. Nope. They just wanted him to try the freaky move. It worked and Dallas won. But the Avs made a good show of it just the same. 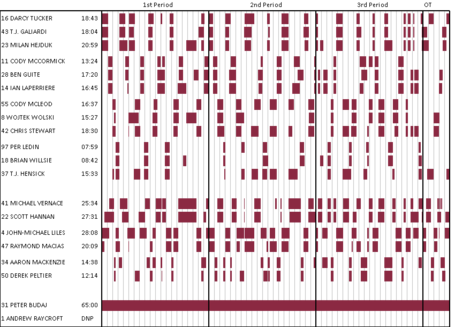 Per Ledin finally made his NHL debut, and boy am I pissed off about it. He was given limited ice time (thanks Tony!), but looked impressive. I don't really understand - he went to the front of the net, got back to help out defensively, didn't make any drop passes to the other team, was physical and drew a penalty. We couldn't have used this all year? And next year, he'll be in Sweden and we'll be paying Darcy Tucker 2-point-whatever-million to do none of those things next year. Hoo-fucking-ray.

The Avs host the Canucks on Saturday. It will be Ian Laperriere's 1000th NHL game.

Mike Ribeiro stated after the game he wouldn't have attempted that shot  in the shootout if the Stars could have lost if he missed. If you're gonna try it, you better make it. - Brandon Worley, Defending Big D

At this point you would have never been able to tell this was a game between two teams that had already been eliminated from the post season.  Both teams were flying up and down the rink generating great scoring chances only to be denied by the goaltenders.  It truly had the feeling of a playoff game. - Derek B, Defending Big D

On an interesting side note - and this may be part of a larger offseason post - but a buddy I work with tried working a few connections to get me some backstage access at one of the weekend games. It was soundly denied by the team due to their awesome team policy of not talking to their fans. Though they appreciate my "passionate following of the team", they weren't willing to take a minute to listen to one. Or even give a pre-game tour to someone who just dropped a couple grand to watch the team during one of the worst season's in franchise history - Shane, Avs Talk