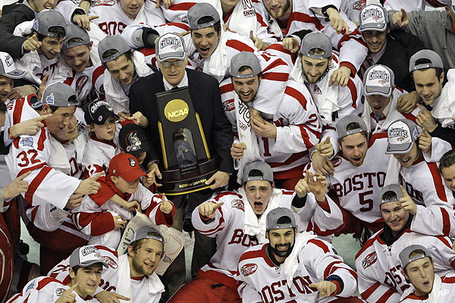 From goats to heroes. That was the experience for sophomore defensemen Kevin Shattenkirk and Colby Cohen. With the game tied at one and under eight minutes remaining in regulation, Cohen lost his man in the oncoming rush, a puck bounced off Shattenkirk’s pads and was shoveled into the back of the net by Miami’s Tommy Wingels.

A one goal deficit could be overcome, but two?

After Boston University killed off Miami’s seventh power play opportunity, Kevin Shattenkirk turned the puck over just inside the blue line and Trent Vogelhuber burned Terriers net minder, Kieran Millan, for his second goal of the season. There was elation on the RedHawks bench and dejection on the Terriers’.

As the game closed to its final minutes, BU coach Jack Parker, pulled his freshman goaltender in hopes his players would create more opportunities on the Miami net. At first the Terriers saw little success, but with a minute remaining in regulation, Zach Cohen (no relation to Colby) jammed the puck in around a crowded RedHawks goal.

With seconds remaining, Hobey Baker winner, Matt Gilroy, passed the puck to an open Nick Bonino, who tied the game with his 18th goal of the season. The crowd came to life with two goals scored in 42 seconds. Miami failed to capitalize on a chance with under two seconds remaining and the teams headed to overtime.

The clubs exchanged chances early in the overtime session and the play was fairly even. With the clock ticking under the nine minute mark, Kevin Shattenkirk skated along the blue line with the puck, then dropped it back to his defensive partner Colby Cohen. As Cohen shot the puck towards the goal, alternate captain Kevin Roeder of Miami, slid down to block the shot. The puck would ricochet off of Roeder into the air, over the shoulder of goaltender Cody Reichard, and into the net. An excited Terriers team surrounded Cohen in celebration.

As the Terriers celebrated, Justin Mercier’s head hung low. He was the best player for Miami in the West Regional, but failed to record a point in the Frozen Four. Yet, goal scoring isn’t all to Mercier’s game. He’s a tenacious fore checker and rarely takes a shift off. He had his opportunities, including a 2 on 0 which was stopped by Kieran Millan.

His numbers dropped to 29 from 40 (in his junior season), but finishes his college career with 104 points in 157 games. He’ll likely put pen to a contract this off-season and play with the Lake Erie Monsters next year.

Cohen (32 points in 43 games) was named the first star of the game in addition to being named the Most Outstanding Player and to the All Tournament Team.

Brandon Yip would be credited with the secondary assist on the goal that would pull the Terriers within one late in the third. It was the 100th career collegiate victory for the BU senior class. Yip finished his senior year with 20 goals and 23 assists in 45 games and will no doubt garner a contract this off-season from the Colorado Avalanche.

As for Shattenkirk (28 points in 43 games), his turnover in the third period became a distant memory. Whether he decides to turn pro or return to Boston University will be known in the near future. Right now he is a champion and the play he made to Cohen will be a lasting memory and one Avalanche fans hope to see in the future.