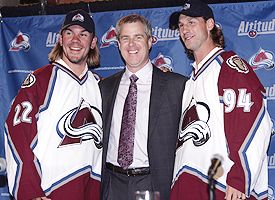 Well, that didn't take long. Francois Giguere has been fired by the Avalanche and will be replaced by Pierre Lacroix "until a new management structure is announced." I said last night that I thought moves would happen quickly. I was planning to write about Giguere later today, actually, but now it looks like that story will be more of a restropective.