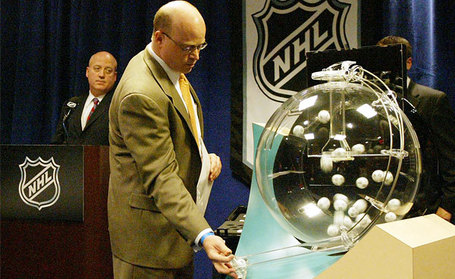 Tonight's the night, 8pm eastern on Vs (or TSN for you Canadians). After an agonizing 48 hours, the Avalanche will FINALLY learn their draft fate (if Pierre Lacroix hasn't already traded the pick to Tampa for Vinny Lecavalier, that is). I think MHH readers are versed enough in the draft lottery to know how tonight will go - the Avs will either draft 1st, 3rd or 4th depending on how things shape up tonight.

But how does the lottery really work? As we've done all year, let's go to that terrific resource NHLSCAP.com:

Fourteen balls, numbered 1-14, are placed in a lottery machine and four are drawn, forming a series of numbers. A probability chart, created by Bortz & Company, divides the possible combinations among the 14 participating clubs. The four-digit series that results from the balls drawn are be compared to the probability chart to determine the team to which that combination has been assigned.

WOW. That sounds so incredibly...dull. I just hope there's no Matlock reruns on at the same time or I might be tempted to switch over. I need to sneak a peak at that probability chart.

There are 1,001 numerical combinations possible, with one combination eliminated to make the odds fair; if the eliminated combination is drawn (a 0.1% probability), the drawing is immediately re-done.

My aching head. There's no better way to do this?

Seriously, am I the only one who thinks the NHL Lottery is kind of a big waste of time? I mean, someone has to generate a probability chart with 1,001 combinations just so that ONE TEAM can move up 5 spots in the draft? Why bother? Does it really make sense that Colorado can jump to 1st overall but can't jump to 2nd? Don't they make probability charts that can handle more than one team moving up?

My biggest gripe about the lottery is that it fails to really do what it's supposed to do - keep teams from tanking. The Islanders, Lightning and Avalanche were a combined 4-20-6 over their final 10 games. The Avs lost successive home games by a combined score of 15-2. New York topped that with a 15-1 walloping of their own in back-to-back. And certainly the Islanders were doing their best to win when they sent Brendan Witt out in the shootout. From the little I saw of the Lightning, you could probably make a case that they were actually trying to win most nights. A lot of good THAT did...

If you really want to stop tanking, give the first overall pick to the highest-ranking team to miss the playoffs and then move down from there. Reward the teams that make a legitimate effort to win but fall just short of all that yummy playoff revenue. Really, don't the Panthers - a team that could have traded Bouwmeester but held on to him to make a playoff run - deserve Tavares more than one of the 5 sacks of crap in the running now? Colorado, Tampa and New York would have to rebuild with middle-round picks - no quick fixes for you.

That will never happen, of course, so we'll continue to see teams roll over and play dead in order to improve their chances on that probability chart. I can barely contain my excitement.