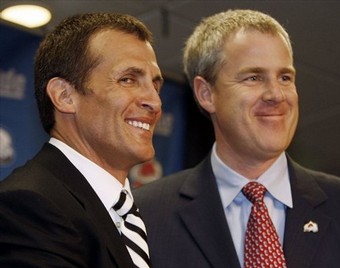 The Colorado Avalanche are notorious for their Soviet-like vise grip on any and all information relating to the team. This complete lack of respect for their fanbase is, of course, infuriating. The Avalanche made a huge organizational change yesterday but instead of getting excited about the future, fans are left scratching their heads.

Even the beat writers are left wondering. Last night I posted the Aaron Lopez link where an inside source thinks that Tony Granato will be let go as well. But Adrian Dater thinks Granato might be spared:

While the Avs remain tight-lipped about firing Giguere, a picture is emerging that Lacroix blames more of the Avs' current troubles on Giguere's decisions than on Granato's coaching methods.

That "picture" can be summed up in one word: troubling.

I'm not going to nominate Giguere for GM of the Year or anything, but I don't understand how the Avs troubles this year can be thrown just on Giguere's shoulders. Remember, this is largely the same team that got to the 2nd round of the playoffs a year ago before injuries finally took their toll. Yes, Giguere made some missteps this summer, but Tony Granato's team played far below their capabilities all year long.

Dater points out Giguere's two big gaffes this summer: signing Darcy Tucker and not re-signing Jose Theodore. No question, the Tucker signing was terrible by any measure (and, I might add, one that seemed to have Lacroix's fingerprints on it). But, honestly, we need to stop this Theodore thing now. Theodore finished .01 ahead of Budaj in goals against average and .001 ahead of him in save percentage, all for just $3.5 million extra in salary. If Dater thinks we're in cap trouble now (he thinks that cap management may be factor in the firing), how would be with Theo's $4.5 milllion anchor around our necks?

But not every Giguere move this summer was a bad one. Yes, he banished Johnny Boychuk for Matt Hendricks. Boychuk was named the AHL's Defensemen of the Year and Hendricks wasn't kept on the roster even when he was needed. However, Giguere managed to re-sign John Liles and Adam Foote to cap-friendly deals when we thought he'd only be able to keep one. And he got a 2nd round pick for Brad Richardson - a significant coup. Really, Giguere's biggest mistake this offseason was, in my opinion, hiring Tony Granato.

Francois Giguere inherited a team in terrible shape. Years of Lacroix's poor early-round drafting and his aggressive trading had thinned the team's talent base. Peter Forsberg and Adam Foote had already departed under Lacroix's watch, and Rob Blake would leave a few weeks after Giguere took the reigns. Lacroix's bumbling of the transition to the salary cap meant that the Avalanche had to let these key players walk away.

Down the stretch, the Colorado Avalanche looked more like the Lake Erie Monsters. Interestingly, the two players who seemed most likely to make the Avalanche roster next year were TJ Galiardi and Michael Vernace. Galiardi is the one call-up that Giguere drafted and Vernace was the acquired in Giguere's first move as a GM (grabbed from SJ a 6th round pick). Meanwhile, Derek Peltier and Ray Macias seemed less ready to make the jump. Those guys are former Lacroix picks. Meanwhile, Giguere picks Kevin Shattenkirk and Colby Cohen appear to have a strong NHL future ahead of them.

While Giguere hasn't exactly returned the team to it's former glory, they are certainly in better shape today than when he arrived. He made some tough moves (Tanguay) to right a sinking ship. Don't forget the dead cap room Giguere inherited because of bookkeeping errors, not to mention the $6 million Jose Theodore upper decker Lacroix left before high-tailing it upstars.

I don't think that Giguere is a genius. His team did poorly - very poorly - and it cost him his job. I understand that. I just don't understand how there is ANY speculation that Granato will be retained. He deserves at least as much blame for this dismal season as Giguere does, if not more.

I couldn't help but notice the following nugget in an AP article on the firing:

After Colorado's disappointing season concluded with a 1-0 loss to St. Louis on Sunday, Granato said it was going to be a long summer.

If he stays, no truer sentence will be written this year.