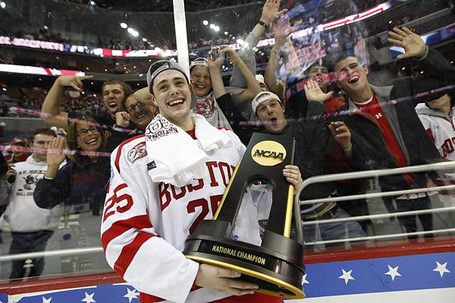 It was a magical end to the college hockey season.  One of the best championship games in recent memory involved an epic comeback by Boston University and heartbreaking finish for Miami University.  Four Avalanche prospects were involved in the Frozen Four championship game that is already considered an instant classic.  Yet, the Avalanche had 11 prospects in all that played on seven teams, across three conferences this season.  For some, it was a season of growth, others it was disappointment and for a special three it was triumphant.

In this first part, five of the 11 collegiate prospects, including Colby Cohen (pictured) will be discussed.

After posting more than a point per game with the Indiana Ice (USHL) in 2007-08, Paul Carey joined a Boston College Eagles team that was coming off a Frozen Four championship.  The Massachusetts native came in with high expectations and spent some time on the top two lines for BC in his freshman year.  Carey scored two goals in the opening month of the season.  Yet, his ice time decreased and he found himself more of a healthy scratch towards the end of the season.

Carey scored three of his five goals on the power play and it’s in special teams’ play where he is expected to excel in the future for the Eagles.  Boston College will be looking to rebound after failing to qualify for the NCAA tournament.  Carey’s season can be looked upon as a disappointment (only nine points), but with increased ice time, his offensive game should flourish next season.

This was seen as a season of redemption for Mike Carman.  After missing the first half of the 2007-08 season due to suspension, Carman returned with a gritty determination by scoring an overtime goal in game two of the first round of the WCHA playoffs against Minnesota State.  Unfortunately, things didn’t seem to get on track in 2008-09 for Carman.

With Jordan Schroeder centering the top line for the Gophers, Carman was assigned second line center duties.  Yet, he was unable to provide the necessary secondary scoring that would propel the Gophers into the NCAA tournament.  His offensive game stalled this season.   He seemed to tighten up at the most inopportune times.  With Ryan Stoa gone and the possible departure of Schroeder (depending on the NHL team that drafts him in June), Carman will be looked upon to step up even more, should he return for his senior season.

Prior to his drafting by the Colorado Avalanche, Colby Cohen already had a Colorado connection.  One of his cousins is former University of Colorado wide receiver Jeremy Bloom.  There was also a time Cohen considered taking his hockey skills to the University of Denver.  Yet, he followed his good friend, and fellow draftee, Kevin Shattenkirk to Boston University.  So far the decision has been a good one.

Cohen wasn’t perfect in 2008-09.  He made mistakes this season.  There were defensive blunders that saw BU head coach, Jack Parker, bench his talented blue liner from time to time.  His booming right-handed shot from the point makes you drool.  However for some, it leaves you in emotional and perhaps even physical pain.  Just ask Miami’s Kevin Roeder.

Some questioned what Brad Malone would contribute to the Fighting Sioux after coming off just three points in his freshman campaign.  Malone spent most of the 2008-09 season centering the fourth line for North Dakota.  While the gritty forward’s point totals jumped to 17 this year, his best game may have been the final game of North Dakota’s season.  In the opening round of the NCAA tournament, the Sioux lost 6-5 in overtime to New Hampshire.  Yet, Malone scored a dandy of a goal and also assisted on a goal in the game.  Yet, he and his team mates were thwarted by a dramatic comeback by the Wildcats.

Malone’s progression will be an interesting story to watch next season as he should see an increased role with the Fighting Sioux.  An interesting fact about Malone is that his cousin is none other than Ryan Malone of the Tampa Bay Lightning.

The last game of Justin Mercier’s college career will bring back painful memories.   He watched from the bench as Colby Cohen, a potential future team mate, scored the game winning goal in the first overtime of the 2009 NCAA championship game.  Mercier hung his head low as Boston University celebrated, but the left-wing from Erie, PA enjoyed four productive seasons as a member of the Miami RedHawks.  He has much to be proud.

Mercier’s junior year was his best statistical season, but the RedHawks couldn’t make it past eventual 2008 Frozen Four Champion, Boston College, in the second round of the 2008 NCAA tournament.  Mercier’s goal totals dropped from 25 to 14, but three of those 14 goals were scored in the 2009 West Regional, that helped propel Miami to the Frozen Four.

Mercier’s gritty two-way game should adapt to the pro level.  As of this posting, there hasn’t been any news of a contract signing for the senior.  The Avs hold his rights until August 15, 2009.